New research provides one more reason to thank your mom this Mother’s Day.

In the first study of its kind, researchers at Washington University in St. Louis have found that preschool-age kids whose mothers actively support them during a stressful incident later show greater volume in the hippocampus, a region of the brain strongly associated with memory that has also been linked to the capacity to manage stress. The results, published in the Proceedings of the National Academy of Sciences, add to a growing body of research suggesting that nurturing parenting early in a child’s life is critical to his or her healthy development. 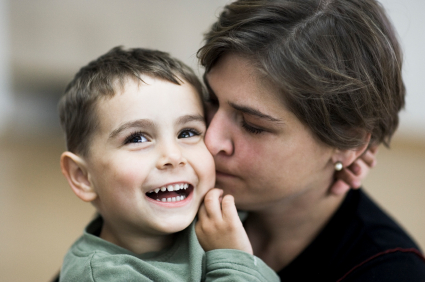 Previous studies have found that kids who receive warm, supportive parenting are better at coping with adversity and at completing cognitive tasks later in life. While studies in animals have found these benefits reflected in brain structure, prior neuroscience studies in humans zeroed in on at-risk kids, such as children raised in orphanages, which made the results difficult to generalize.

In this new study, the researchers first recruited children between the ages of three and six, screening them for depression. When they were between the ages of four and seven, the children, along with their mothers, were observed in a stressful situation any parent would dread, known as the “waiting task”: The kids were asked to wait for eight minutes before opening a brightly wrapped gift sitting in front of them; the mothers, meanwhile, had to complete a survey. The researchers scored the parents based on the kinds of strategies—supportive or non-supportive—they used to help calm their anxious kids.

According to the study’s lead author, Jean Luby, a professor of child psychiatry at Washington University’s medical school, “supportive” parents provided reassurance to their child, offered their child a strategy for coping with his or her distress, showed affection (e.g., a pat on the back), and encouraged their child to wait patiently given that the reward would come soon, among other techniques.

When 92 of the children originally recruited for the study were between the ages of seven and 13, the researchers took scans of their brains, measuring the volume of their hippocampus.

The results show that mothers who were more supportive during the waiting task generally had kids whose hippocampi were bigger than those of the other kids years later. This was true even when the researchers controlled for factors known to affect the size of the hippocampus, such as whether a mother was depressed or a child had experienced traumatic events.

However, hippocampi were only significantly larger in children who weren’t diagnosed as depressed themselves. Depressed children had smaller hippocampi, even if their mothers acted supportive during the stressful task.

Prior research has linked hippocampus size to stress: A smaller hippocampus has been observed in people who’ve experienced a lot of stress, including people suffering from post-traumatic stress disorder. In this study, the fact that kids with nurturing mothers later had larger hippocampi suggests that the positive parenting techniques observed by the researchers may have profound effects on the kids, even down to the level of their brains, and may help make them more resilient to stress.

The researchers argue that because it’s possible to teach nurturing parenting practices, their results have profound implications that could positively affect the lives of countless children.

“Greater public health emphasis on early parenting could be a very fruitful social investment,” they write. “This finding, when replicated, would strongly suggest enhancement of public policies and programs that provide support and parenting education to caregivers early in development.”

Our eldest son was the most loved and nurtured child you
can imagine. Affection and attention, not spoiled but
adored by both parents, he had a happy childhood. We
thought he would be OK and well prepared for life. He went
to live in the UK, with a uni degree and work experience
and inexplicable life seemed too much, depression
apparently…  He received all what was needed but was not
enough. Your article should also consider the external
environment. Lack of exercise, lack of family around, work
pressure, smoking and drinking and London life style killed
my son. He contacted Back on Track, a mental health
organization but their response was inadequate. A few days
later he took his own life. As parents we did all we could, so
what was missing?

Thank you for sharing your heartbreaking story
with us, Marisol. I’m so sorry to hear about your
loss of your son. As this study suggests, the
weight of depression can be devastating, no
matter the best efforts of parents. Here, the
researchers found supportive parenting shaped
children’s brains for the better—but only when
those children were not depressed. When they
were suffering from depression, their brains didn’t
show the same kind of growth, regardless of the
type of parenting they received.  And yes,
definitely, as you write, external circumstances
can exacerbate the effects of depressions, with
tragic consequences. My heart goes out to you and
your family, and I’m grateful for your willingness to
share your family’s experiences with us.

Thank you for this post - it underlines the importance of being truly ‘present’ alongside our children and giving them our empathy and confidence so that they can feel safe enough to be able to strengthen resilience.

It is so difficult for parents of highly sensitive children who often feel beset with conflicting advice - not least that they should ‘make’ their children toughen up.

This research will help them see that there is evidence that being supportive is something they can do and that it will make a difference.