"Americans in the twenty-first century devote more technology to staying connected than any society in history, yet somehow the devices fail us: Studies show that we feel increasingly alone."

So begins the new book The Lonely American, by psychiatrists Jacqueline Olds and Richard Schwartz (Beacon Press, 2009), which describes America's obsession with living separately from others and the corresponding (often hidden) costs to our psychological health. 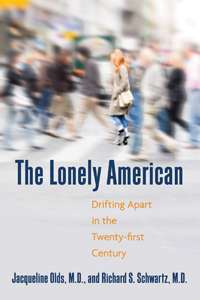 The number of single-person households has increased from roughly seven to 25 percent of all households in last 60 years. But as psychologists have discovered, humans are meant to live in groups, and they thrive through their social interactions. People feel sad and vulnerable if they are not connected to others, if they perceive themselves as being "left out." So why is it a sign of wealth and prestige in our culture to have "a room of one's own"? Or to buy a large house in an isolated community where you have little contact with one's neighbors?

"People in our society drift away from social connections because of both a push and a pull. The push is the frenetic, overscheduled, hypernetworked intensity of modern life. The pull is the American pantheon of the self-reliant heroes who stand apart from the crowd," write Olds and Schwartz.

In other words, we want to escape from the stress of constant interaction, and we romanticize the idea of standing on one's own feet and not needing help from others. Unfortunately, though these ideas are deeply ingrained in the American psyche, they are at odds with our natural instincts.

The authors illustrate this point by telling stories of their patients. When one patient moves to the country with her husband to find peace and solace in the midst of a life threatening illness, she finds instead that the lack of human contact leads her down a deep spiral of depression. Only when she reconnects with friends and family is she able to recover. In another instance, a patient descends into alcohol abuse when her marriage dissolves, calling her daily bottle of wine "my best friend." Like many people who fall prey to drugs, she uses alcohol to dampen the very real pain of social isolation and rejection.

Olds and Schwartz denounce the American "cult of busyness" in which people gain more respect and deference the busier their lives become. Over-scheduling and over-working has led to individual exhaustion and alienated families, they argue, and to communities where neighbors are afraid to drop in on other neighbors for fear of disturbing them.

They also look at the role technology plays in interpersonal relationships, arguing that new technologies work best when used to extend rather than replace social interaction. Humans still need face-to-face contact with others, they argue, to correctly read emotional cues and to feel close to other people. Technology is no substitute.

The Lonely American makes a strong case against social isolation. It increases our chances of experiencing loneliness and a corresponding reduction in happiness, health, and longevity. So what's to be done? Overcoming these trends won't be easy, Olds and Schwartz write, but we should try––the personal costs of loneliness and the drain on environmental resources to support one-person households are too high not to. Perhaps if we re-examine our notion of the solitary hero and honor the heroes "whose courage and creativity flow from their engagement and connection with others," they write, we can build a more communitarian society.

So turn off your computers, go knock on your neighbor's door, and don't take "no" for an answer. You may not be greeted as a hero, but you might make at least one person feel a little less alone. And that's got to be a step in the right direction.