“Stop and smell the roses” may be a cliché, but new research suggests it’s sound advice for finding satisfaction in life. A forthcoming study in the Journal of Personality and Individual Differences suggests that appreciating the meaningful things and people in our lives may play an even larger role in our overall happiness than previously thought.

In the study, Rutgers University psychology professor Nancy Fagley had nearly 250 undergraduates take a survey measuring their levels of appreciation, which Fagley defines as “acknowledging the value and meaning of something—an event, a behavior, an object—and feeling positive emotional connection to it.”

This is distinct from gratitude, Fagley says, which is a positive emotion directed toward a benefactor in response to receiving a gift of some sort, and is just one of several aspects of appreciation, according to Fagley. Indeed, in his book Thanks!, Robert Emmons, perhaps the leading scientific expert on gratitude, writes that gratitude isn’t just about acknowledging the goodness in one’s life but also “recognizing that the source(s) of this goodness lie at least partially outside the self.”

Fagley’s survey of appreciation zeroed in on eight aspects of it, including awe—or feeling a sense of connection to nature or life itself—and living in the present moment.

The students in Fagley’s study also took surveys to evaluate their levels of gratitude and overall life satisfaction, and completed a standard questionnaire measuring what researchers call the Big 5 personality traits—openness, conscientiousness, extraversion, agreeableness, and neuroticism. 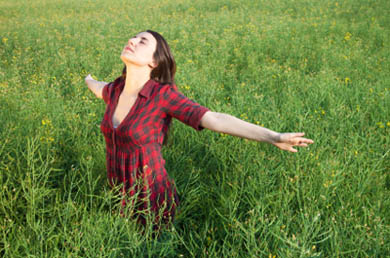 Fagley wanted to see whether appreciation carries distinct benefits on its own, regardless of one’s personality or level of gratitude.

Fagley is still researching how best to practice appreciation on a day-to-day-basis, she says. But for starters, she suggests that people focus on and value what they have, spend time outdoors, and reflect on their blessings and relationships with others.

“The challenge in fostering appreciation,” she says, “is that we want to periodically reflect on the positive aspects of our lives, value our friends and family, relish and savor the good times—without the practice of reflection becoming a rote habit or something that is taken for granted.”

In my personal experience, practicing appreciation
is the most powerful way to increase my
enjoyment of life. Whenever my mind isn’t busy
with what I’m doing, I look around at how beautiful
the world is. I deliberately DECIDE that it is
beautiful and then enjoy that. At this point, it’s
hard for me to tell whether earlier, I would have
seen it as so beautiful. Or whether it now seems
so beautiful because I’ve practiced appreciation for
some time. A happy thing to have to wonder
about.

My husband says that his life changed when once
in a restaurant, we discussed appreciation. That
was a decade ago. He had complained about
something. I suggested that he consider the
waitress. We were about to eat a wonderful meal
because she was doing a good job of bringing it.
Without the waitress, we couldn’t have received
the meal. Why not focus on appreciating that she
knew her job and performed it well? My husband
has told me since that it never occurred to him to
appreciate such ordinary things.

Yet, isn’t it a miracle that so many people who
came before us have done so much for us, and so
many people today contribute to every detail of
our lives?

The practice of gratitude is like a muscle that needs to be exercised - the more you look for things in life you can be grateful for, the easier it is to find them. Savoring is a great way to establish a connection with our blessings.

I also liked this article’s distinction between appreciation and gratitude.  I use them interchangeably and I understand the difference now.  Thank you!