Power is a tricky thing.

These days, many leaders are redefining their relationship with the people they manage, embracing more open discussion, humility, and even friendship. And while this may be an improvement over command-and-control, it doesn’t mean that power dynamics—and the complications that go with them—have disappeared. 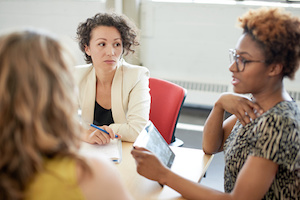 A recent study illustrates this hard reality, finding that apologies from superiors at work aren’t effective because we’re cynical of those in power. In other words, forgiveness is harder to come by when you’re higher in the hierarchy.

“Because high power is often associated with a hidden agenda and exploitation, leaders, as those who possess power, are viewed with cynicism,” explains Michelle Zheng, the lead author on the study. “Ironically, these perceptions may have nothing to do with the content of apologies.”

This may be bad news for organizations as a whole: If employees are harboring grudges, research suggests, they may be less productive, collaborative, and engaged, and more stressed and aggressive.

Across two surveys, Zheng and her colleagues asked more than 360 employees in the United States to recall a recent time they were hurt, harmed, or offended at work. For example, they might remember colleagues taking credit for their ideas, criticizing them unfairly, or denying them time off. They reported whether the transgressor had power over them—the ability to influence their pay or promotion, or tell them what to do—and whether that person had apologized.

Participants also answered questions about their level of forgiveness—whether they felt goodwill toward the person or were still avoiding them, for example—and whether they tended to be cynical of the person’s words and motives.

Ultimately, the researchers found that apologies didn’t work when they came from people in positions of power. Subordinates were more likely to be forgiven when they apologized (vs. when they didn’t), but people in power weren’t—they were less likely to be forgiven in general, and apologizing didn’t help their cause. When the researchers dug deeper into the data, they found that participants were more cynical of their superiors, and this explained why the apologies were ineffective.

To gather more evidence of this dynamic, the researchers tested it in the lab. They recruited over 100 European undergrads to play a game where some players started with 10 chips and had to decide how many to transfer to a second player; those chips were tripled, and the second player then decided how many to return.

The researchers manipulated who had more power in the game simply by framing it differently: They told some players that Player 2 depended on them to transfer chips to him, and told others that they depended on Player 2 to transfer chips back. When no chips were returned—Player 2 was actually a computer, programmed to be greedy—some of the participants received a basic apology via digital message: “Hey! I’m sorry about what just happened.”

And here, too, the same pattern appeared: Apologies from high-power players simply didn’t inspire forgiveness, partly because the low-power players were more cynical of them.

So what is a well-intentioned leader to do after harming or offending a subordinate?

“We do not claim that leaders should not apologize,” the researchers clarify. Instead, one approach is to try offering better and more substantial apologies than “I’m sorry about what happened.” The most effective apologies typically include other elements besides remorse, such as empathy, taking responsibility, and offers of reparation. If an employee got stuck with excessive work that wasn’t her job, for example, offering an afternoon off or some special recognition could go a long way.

Unfortunately or not, power itself may always inspire cynicism and complicate our relationships with others—something for leaders to keep in mind even as they try to be as genuine, trustworthy, and humble as possible.