There are lots of things about my brain I’d like to repair, starting with a tendency to wake too early. More than that, though, I want help for loved ones suffering worse neurological problems like autism, chronic pain, depression, and more. 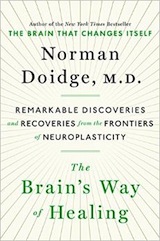 In the last decade, we’ve learned that the brain continues to make new connections and prune others throughout the lifespan. This insight has helped fuel the study of neuroplasticity, or the brain’s ability to change itself—for better or for worse—in response to external conditions like poverty, or internal ones, such as thoughts or meditation.

As a developmental psychologist, I was excited for an update of this hot area of neuroscience in Norman Doidge’s new book, The Brain’s Way of Healing: Remarkable Discoveries and Recoveries from the Frontiers of Neuroplasticity. It follows his 2007 New York Times bestseller, The Brain that Changes Itself.

At face value, the therapeutic promise of neuroplasticity that Doidge describes is astounding. Chapter by chapter, he explains how we can apply light or electricity from outside or manipulate thoughts on the inside to treat chronic diseases, the kind that have been incurable or typically require heavy pharmacological or surgical intervention. It’s the kind of book that seems like a bull’s eye for many Greater Good readers.

But skeptical readers looking for good evidence must hunt for it amidst the narrative. Like a magician practicing redirection, Doidge distracts the reader from rather thin descriptions of the neuroscience with long-winded anecdotes. It left me wishing for just a good summary of the evidence, pro and con.

Visualization can reduce pain, according to Doidge; the motion of intense walking can heal Parkinson’s; and light treatment can heal tissue damage. He also states that electrical stimulation can improve symptoms of multiple sclerosis; Mozart and a mother’s voice can heal some forms of autism; and fine Feldenkrais movements improve cerebral palsy.

Doidge relies mainly upon near-miraculous anecdotes of recovery to support his claims. He also draws selectively from a sprinkling of clinical trials, peer-reviewed articles, and nascent research, especially at Harvard and Stanford; and he extrapolates from studies that support his general train of logic. He does season the book with a good dash of caution—every brain is unique, no two problems are the same, location of damage matters, injuries are different than chronic problems.

What he does not do, however, is present disconfirming or contradictory evidence. That—plus the fact that several of the treatments Doidge discusses are associated with businesses that in turn advertise his book—left me with less than complete trust in his analysis.

Since I’d heard of some of the therapies he described, I decided to crowd-source some anecdotal evidence of my own. A friend who has suffered chronic pain for fourteen years had visited a physician Doidge profiled, one who uses visualization to control pain. His method didn’t work for her, but she says someone she knew did recover from eight years of chronic pain with the treatment.

But a neuroscientist friend had never heard of a lollipop-like device held in the mouth to deliver electricity to the brain. Doidge describes the near-complete reversal of 23 years of Parkinson’s symptoms in one patient after only two weeks on the device.

“Is there a peer-reviewed study of this?” my friend asked, incredulous. I didn’t see one mentioned in the book.

Some of the treatments are more credible than others. For instance, veterinarians and medical practitioners have successfully used light and laser therapy for tissue damage for some time.

Not so with autism. Doidge’s reasoning goes like this: The primary disorder of autism is a sensory-processing deficit that makes these kids hypersensitive to sound. Because the brain evolved a sensitivity to sound to signal danger, children with autism remain in a constant state of fight-or-flight. It is this elevated stress response that prevents them from engaging with the social world.

The treatment that Doidge details works by playing modified versions of Mozart’s music, along with sounds of the mother’s voice, to alternately stimulate and calm the auditory system. The child supposedly becomes more receptive to traditional language therapy and social engagement.

Since he didn’t report any clinical trials of this treatment, I consulted several Stanford experts for their opinions.

“There is no scientific evidence that auditory treatments are effective in autism,”
said a developmental behavioral pediatrician. At least one meta-analysis (an analysis of many studies) and one review of randomized control studies (the gold standard of research methodology) of sound therapy and auditory integration programs have concluded there is no evidence to recommend the treatment.

“I have seen…[auditory therapies] used in ways that are highly traumatic for children,” Dr. Heidi Feldman, professor of developmental and behavioral pediatrics, told me. “One child I cared for was forced to sit with earphones day after day. He deteriorated so badly after the treatment, it took a long time for him to get back to his previous level of functioning.”

And Doidge says that the cause of autism is inflammation in the brain triggered by an immune response—an explanation that he does not explicitly, but should, clearly separate from the discounted notion that vaccines cause autism.

The underlying causes of autism are diverse, as are the presenting symptoms, Dr. Feldman told me, so no one treatment will invariably get through to change all of the children.

Doidge’s descriptions of the underlying mechanisms of change throughout the book are vague and incomplete, and not up to acceptable scientific standards. Most of the treatments he describes rely on the brain’s capacity to rewire and reorganize, activating “dormant” areas here, quieting “noise” there, building new connections through repeated micro-practices, sometimes in combination with traditional rehab. That terminology is too nonspecific to convince me.

Notably absent from the book, given that Doidge is a psychiatrist, is any discussion of psychological or social trauma or stress, especially those experienced in childhood. In my opinion, neuroplastic therapies aimed at the developing brain are the most promising and urgent, like that of developmental interpersonal neurobiology. Yet when it comes to discussing children, Doidge seems to cite mainly outdated psychoanalysts.

All that said, given our nascent understanding of the brain, it is possible that some practitioners are intuiting their way into treatments that science may eventually verify. It’s happened before: yogis and monks were meditating a couple thousand years before we understood that the practice changes the brain and even lengthens telomeres on chromosomes, affecting aging and the lifespan. Doidge reminds us that we still don’t even know where a thought resides—in neurons, between neurons, or in large networks. Thought itself is still a miracle as far as modern neuroscience is concerned.

But different people have different tolerances for experimentation. A friend “runs the other way” from experimental treatments for her 28-year-old son with autism, preferring evidence-based approaches and common sense.

As for me, I may just seek out the clinic that does light therapy for my tinnitus. I’m a little bit desperate, and it might be a while before the peer-reviewed research catches up.