Many of us these days feel busier than ever, multitasking on our phones and computers as we rush from home to work to friends to bed—then do it all over again the next day. Who doesn’t long for idle days on a tropical beach?

Well, before you book your to ticket to paradise, take note: A new study suggests that people who keep busy are more likely to be happy than those who remain idle. 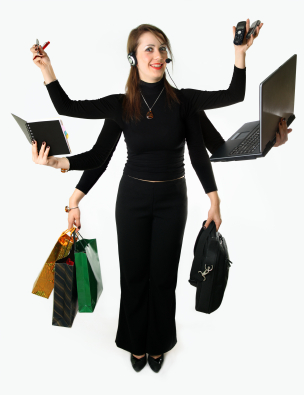 In the study, published in Psychological Science, researchers asked college students to take multiple surveys about their school. After completing the first survey, students could either drop it off right outside the room they were in, then wait idly until the next survey was administered, or keep busy by dropping off the survey at a location that was about 15 minutes away. Either way, they were told they’d receive a candy bar when they turned in the survey.

Perhaps not surprisingly, more students chose the closer location. However, students who kept busy by walking to the farther location reported feeling happier afterward than did the students who remained idle.

What’s more, when the researchers offered a different candy bar at the two locations—milk chocolate at one, dark chocolate at the other—they found that more people chose the farther destination, even though surveys they ran before the experiment determined that the two candy bars are equally attractive to people. Once again, the students who kept busier reported having a more positive experience.

These results suggest to the researchers that people generally prefer to keep busy, even if they think they’re supposed to prefer taking it easy. So when the choice of candy was the same at both drop-off locations, participants found it harder to justify choosing the farther location. But when the choice of candy differed between the two locations, they were able to use the candy as a justification for the longer walk, which might otherwise defy common sense.

In a variation on this experiment, when the researchers randomly assigned participants to drop off their survey at one of the two locations, people who walked the longer distance reported feeling happier afterward, even though in this case they were forced to be busy.

So if busyness makes us feel good, why did participants initially choose to be idle?

The researchers speculate that the answer may lie in our evolutionary history. Our ancestors had to conserve energy in order to compete for scarce resources. That desire to conserve energy has persisted, even though people no longer need to devote their energy to basic survival needs. So an excess of energy builds, yet we still don’t want to expend energy without any purpose.

“We don’t want to say we want to waste our energy for the sake of wasting energy,” says Christopher Hsee, the study’s lead author and a professor at the University of Chicago’s business school, “even though we would probably feel better if we did.”

In fact, Hsee and his co-authors write that people set goals in their lives for no purpose other than to justify keeping busy: “Our study suggests that people search for meaning in order to work”—not the other way around.

This doesn’t mean that a life of stress and excessive busyness is good for you—quite the opposite, in fact, according to previous research.

“We’re not saying excessive business is good,” says Hsee, “but we do find that a certain amount of busyness is better than idleness.”

I don’t see how this study demonstrates what it claims to demonstrate.  We know that physical activity tends to raise mood.  How do the authors know that the effect of walking 15 minutes is due to being “busy” versus the physiological effects of exercise?  Why no control group of people who were kept busy without exercise (sitting still doing a puzzle, for example)?

I can only see the abstract (authors are affiliated with business school? and are speculating on evolutionary history?) so perhaps am missing something.  At present, though I am no scientist, I do not see how this qualifies as actual research.

Hi S, thanks for your question.

The researches replicated their findings in a different context.  For this experiment, participants were kept busy without exercise.

Those who were told that they could reassemble the bracelet into the original design were more likely to remain idle.  Those who had the option of reassembling the bracelet into a different design, were more likely to chose the busy option, mirroring the findings in the original experiment wherein there was an increased desire to chose the busy option when there was some sort of justification (preference for the kind of chocolate at the faraway location).

Researchers found that in the bracelet experiment, those who chose the busy option were more likely to report having had a more positive experience during the experiment than those who remained idle.

The head researcher, Professor Christopher K. Hsee, is professor of behavioral science and marketing. From the University of Chicago website:

Quite interesting.  Thanks for the explanation!

I completely agree.  Humans seem to thrive when they “achieve” and busy people seem to achieve more.

I am from India and this is an interesting article.

I agree - I am much happier when I am busy. People need to stay busy and feel like they are making a valuable contribution to the community. There is a fine line though in letting stress take over your life.

I am a happy, busy researcher and educator
and it looks to me that you might have tested for folks
that “go outside” or “get sun light” or “walk with a
purpose”
I have to say, walking through a college campus
sounds delightful and not “busy”
you may have also been testing for folks that enjoy
dark chocolate and find it worth the walk.

I am all for encouraging folks to be productive and
happy, and yet, I remain unconvinced by this study

Huh, very interesting.  We bust our humps longing for the day when we don’t have to do so anymore.  So now we’re hearing that we won’t be as happy when we have “made it”.  That’s not too encouraging.  Well hopefully I can find some balance in the meantime.

That’s funny as I was just thinking the same thing.  I am self employed and am doing it so I can lay it down in several years and live the island life.  Maybe I can split my time by then 😊

The researches did repeat their findings in a different context in which the entire experiment was conducted in a single room. In this variation on their experiment, no chocolate was given. (See my comment above for more on this experiment.) Also, in the original experiment, the researchers used surveys before they ran the experiment to determine that the two candy bars are equally attractive to people.

In the variation of the study where the the experiment was conducted inside, researchers came to the same conclusions about the busy group.  They found that those who chose the busy option were more likely to report having had a more positive experience during the experiment than those who remained idle.

I am not convinced of the findings in this article,
either. Walking outside is not equivalent to staying
busy. I don’t think the experimenters proved what
they set out to prove. However, I can understand
why the group who had to sit and wait would be
less happy. We live in a busy, stimulation-intensive
culture, where waiting is difficult to
abide…especially for busy college students.

I also question the results of the second part of the
study. If I’m reading your description right, the
study showed that those who chose to do something
more creative [making their own designs] were
happier than those who didn’t. I would not call
designing your own bracelet busyness. Instead, I
think it’s a creative endeavor and probably led to a
state of"flow”, or complete engagement in what
one is doing. Flow a is associated with happiness,
and one could argue that this is a better
explanation of what happened.

Lastly, how do we know if the students who were
happier chose the creative option, rather than the
other way around? I’m not sure if the researchers
controlled for this or not; but it could explain the
results too.

Just to clarify a bit further: The bracelet exercise involved simply disassembling and reassembling a bracelet, either getting the reassembled bracelet to look exactly like it did before the participant was forced to disassemble it, or to follow another design prescribed by the experimenters. The way it’s described in the study, it doesn’t sound like there was any room for creativity; people were not “making their own designs.” It was a rather menial (and potentially disheartening) task to just undo something and redo it in such a way that made the original undoing seem pointless.

Still, yes, it may seem intuitive that making anything, even something that doesn’t involve any creativity, would be preferable to sitting idle. But I think that’s the researchers’ point, which they’ve backed up with empirical evidence: Many, perhaps most, of us would prefer doing anything, even mindless busywork, to doing nothing. We somehow feel more productive—even if we’re not really producing anything.

And yet… it may also seem intuitive that feeling that one has expended energy for no reason will make one feel discouraged and unhappy. Here the researchers have suggested that such an intuition wouldn’t be correct.

@JS: I think your comment also raises an excellent point, one that the researchers don’t control for—indeed, one that would be very difficult to control for.

They offer an evolutionary explanation for their results, an explanation that sounds quite plausible. Yet it also seems plausible that most or all of the participants in their study are products of a fast-moving, busy culture—a culture in which it’s generally frowned upon to be idle, and that has conditioned them to keep busy most of the time. So it’s very difficult to determine precisely how their reactions to the busyness task were shaped by their culture vs. their deeply rooted evolutionary impulses.

At the same time, one could argue that their culture itself has been shaped by that excess of energy that, the author’s suggest, can be traced to our evolutionary history.

pick up some chocolate on the way. I guarantee you
will feel happier!

Completely agree.  I appreciate your work on the blog and your apparent desire to truly help people.  I know I benefit from you posts.  Thank you.

Thank you for all your efforts.  Your site provides a nice break from the everyday hustle and bustle as well as some great reminders about focusing on what is most important in life.  Keep it up.  Dr. Jackson