Gratitude is central to nearly all religions, yet many Americans see it as a trite and sentimental notion. In his inspiring new book, Thanks!, psychologist Robert Emmons uses science to revive the concept of gratitude, citing new research on how saying “thank you” can measurably increase our happiness.  For example, in one study, Emmons and his colleague Michael McCullough found that keeping a “gratitude journal”—wherein participants regularly listed the things for which they were grateful—produced a 25 percent long-term improvement in self-reported happiness.

Much of the book is devoted to the complex nature of gratitude. True gratitude, Emmons writes, requires a gift giver, a recipient, and an acknowledgment of the gift, and it can strengthen social ties. But gratitude can also provoke negative emotions, such as resentment. “Gratitude presupposes so many judgments about debt and dependency that it is easy to see why supposedly self-reliant American males would feel queasy about even discussing it,” he writes, citing a study that shows American men to be less grateful than their German counterparts. “We don’t like being reminded that we needed help.” Gratitude may be demanding and even threatening, but Emmons reminds us that it is also necessary. 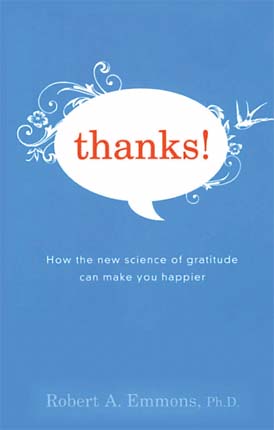