Good news, parents: It seems that giving kids chores does more than keep the house clean; it might actually make them happier, to boot.

In a recent study, UCLA researchers Eva H. Telzer and Andrew J. Fuligni asked more than 700 14 and 15 year olds of diverse ethnic backgrounds to keep a daily diary over a two-week period. In the diary, the adolescents recorded how much they pitched in around the house—for example, by helping to clean, make dinner, or assist a sibling with homework. Adolescents also recorded their moods and the extent to which they felt stressed, anxious, or depressed each day. 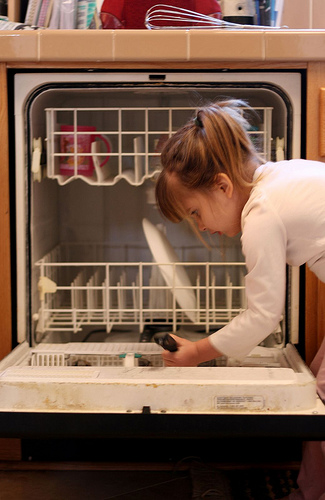 Contrary to common assumptions about adolescents, Telzer and Fuligni found that not only were daily chores not stressful, they were actually associated with greater well-being: The kids who spent more days and more time helping their family reported greater feelings of happiness than did kids who tended to help less.

However, adolescents who helped parents with official or work-related issues, such as filling out government forms, actually reported greater feelings of distress, like feelings of uneasiness and discouragement.

The authors uncovered strong evidence that adolescents felt happier when they helped around the house because they thought they were filling an important role within their family. These findings resonate with previous research that has shown that when a person is established in a social group such as a family, they develop affectionate feelings toward that group and a greater willingness to help it. And when they feel valued by their group, they tend to experience more feelings of self-worth and happiness. Telzer and Fuligni surmise that helping around the house gives adolescents that sense of belonging.

“Assisting the family appears to provide adolescents with the assurance that they are fulfilling their role as a good son or daughter,” they write, “which, in turn, is associated with feelings of happiness and positivity, a sense of identity, and connection to the family.”

Meaningful work and authentic responsibility is vitally important (and too often missing) in the lives of young people. Studies have found that having chores in childhood tends to be associated with adult success.

I write about the skills gained and relationships built when young people are part of household and community work in my recent book Free Range Learning.