If you do a nice thing for someone else knowing you'll reap some benefit yourself, is it still a good deed? What if your primary reason for doing it is because of the benefits it'll bring you?

Researchers spend a lot of time debating whether any altruistic act is ever truly selfless because we benefit so much when we are kind to others. I think of kindness like laughter: we might be laughing because we want someone else to feel good about their joke, but mostly we laugh because it feels good. Like laughter, kindness is a terrific happiness habit, good for both our physical and emotional well-being. 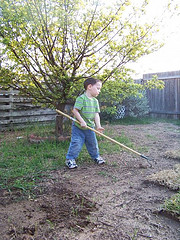 Did you know that kinder people actually live longer, healthier lives? People who volunteer tend to experience fewer aches and pains. Giving help to others protects overall health twice as much as aspirin protects against heart disease. People 55 and older who volunteer for two or more organizations have an impressive 44 percent lower likelihood of dying—and that's after sifting out every other contributing factor, including physical health, exercise, gender, habits like smoking, marital status, and many more. This is a stronger effect than exercising four times a week or going to church; it means that volunteering is nearly as beneficial to our health as quitting smoking!

We feel so good when we give because we get what researchers call a "helpers high," or a distinct physical sensation associated with helping. About half of participants in one study report that they feel stronger and more energetic after helping others; many also reported feeling calmer and less depressed, with increased feelings of self-worth. This is probably a literal "high," similar to a drug-induced high: for example, the act of making a financial donation triggers the reward center in our brains that is responsible for dopamine-mediated euphoria. (For more on the "helper's high," check out this essay by James Baraz and Shoshana Alexander, published this month on Greater Good.)

Finally, nearest and dearest to my heart, kindness makes us happy. Volunteer work substantially reduces symptoms of depression; both helping others and receiving help is associated with lowered anxiety and depression.

This may be especially true for kids. Adolescents who identify their primary motive as helping others are three times happier than those who lack such altruistic motivation. Similarly, teens who are giving are also happier and more active, involved, excited, and engaged than their less engaged counterparts. Generous behavior reduces adolescent depression and suicide risk, and several studies have shown that teenagers who volunteer are less likely to fail a subject in school, get pregnant, or abuse substances. Teens who volunteer also tend to be more socially competent and have higher self-esteem.

It isn't just that kind people also tend to be healthier and happier, or that happy, healthy people are more kind. Experiments have actually demonstrated again and again that kindness toward others actually causes us to be happier, improves our health, and lengthens our lives.

So if we want to raise kids that are happy and healthy, one of the best things we can do is teach them to be kind. Next week I'll be giving some tips for HOW to raise kind children, but for starters, we need to think about kindness and generosity as a skill that we teach kids, and practice with them.

What do your kids do to practice kindness? How have you encouraged kindness, generosity, and altruism in your children? Please post your ideas in the comments and I'll incorporate as many as I can into next week's posting.

Moll, Jorge et al., "Human Fronto-Mesolimbic Networks Guide Decisions About Charitable Donation," Proceedings of the National Academy of Sciences of the United States of America 103, no. 42 (2006).

Musick, Marc A. and John Wilson, "Volunteering and Depression: The Role of Psychological and Social Resources in Different Age Group," Social Science & Medicine 56 (2003).

Oman, Doug, Carl E. Thoresen, and Kay McMahon, "Volunteerism and Mortality among the Community-Dwelling Elderly," Journal of Health Psychology 4, no. 3 (1999).

I don’t often get a chance to comment, but I love the way you write and the topics you choose.
What you write rings a chord because these are the sort of teachings and ways of thinking that I grew up with and that I saw my parents practice and preach: I’ve always seen them give to others around them and I believe that they are happy and content because of this.
Great site and great post.

We have twin 4 year olds. Girls. We make a lot of art for people. Even just a drawing. We also make cookies or other baked goods for people. We’re in the process of planning to do a bake-a-thon for a bake sale for Haiti and my girls are very excited for that. Right now it’s little things but I hope to get them actually volunteering and holding lemonade sales at an early age. I agree with these facts!! I love volunteering. I never knew why until now. Thanks!

I love all your posts, but this one is particularly fantastic.  I think it is so important to talk about the benefits of being good to others.  Thank you for sharing!

I’ve been reading a book with my boys (7 & 5) called “Have You Filled a Bucket Today?”  It very simply describes the power of being kind to others, and the hazards of being a “bucket dipper”.  When my mom gave it to them, I thought the title was a little silly, but the book is straightforward and the boys really got the message (though they don’t always remember it!).  Every once in a while, they’ll come up and give me a hug, or put things away without my asking, then say “I filled your bucket, Mommy!”  Great book!
——-