How does this clip of a teenager falling off a horse make you feel?

If you are like me, you probably winced, and maybe even felt vicarious pain. My mama-instinct is to protect that kid, to get him up and on safe ground. But here’s the thing: Teenagers need opportunities to get bucked off horses (or the equivalent) if they are to thrive. Here’s why.

Adolescence is a time of enormous physical, mental, and emotional development. Few people realize, though, how out-of-sync the timing of adolescent growth-spurts are, or the huge implications this wacky timing has for what teens need from the adults in their lives.

Here are a few of the biologically-based changes that happen at the onset of puberty.

-Increased propensity for risk-taking, usually prompted by a desire to “leave the nest” and to explore. (This occurs in most mammals, by the way.)

-Increased emotional intensity. When researchers watched parents and their pre-teens discuss a conflict, they found that most kids got angry. The pre-teens that had started puberty, however, tended to get MUCH angrier than those who had not started puberty.

-Increased attunement to social status. This happens across cultures, and even species, as the reproductive system matures. Teens will often trade safety for status, taking risks that confer status within their peer group.

Puberty activates neural systems related to specific drives, motivations, and emotions. Those drives and emotions have been present before, but puberty intensifies them—for some kids, quite dramatically.

Unfortunately, as our young teens become more emotionally reactive, what lags is the development of their rational, thinking brain—the part that helps kids keep those strong emotions in check. It can take several more years for those cognitive control systems to become fully functioning. Which means that teens need help regulating their intensified emotions and risk-taking impulses.

Sleep is a simple example of how kids need help managing a slight biological change that can have major implications for their well-being.

There is often a subtle change in sleep patterns at puberty: Many teens feel a greater desire to go to bed later, and they tend to sleep longer in the morning. But this small biological change is not large enough to dictate kids’ sleep patterns. Teens whose parents enforce bedtimes don’t have trouble falling asleep at 9:30pm and waking up at 6:45am, for example.

Yet teens’ environment can create a dramatic change in adolescent sleep patterns. Feeding their budding preoccupations with social status and staying up late, many teens now have so much late-night stimulation—texting with friends, watching YouTube videos, not to mention doing their homework—that despite exhaustion, they stay awake well into the night.

Parents often think that their newly independent teens can manage their sleep schedule. Usually, they’re wrong. The vast majority of adolescents do not have the cognitive control they need to resist temptations—like, say, a text from a love interest—simply so they can power down and go to sleep.

So what teens need is STRUCTURE at the same time they are granted greater autonomy. This is a bit of a conundrum, I know, but it really isn’t that different from the limited choices we give our younger children (e.g., “you can have an apple or carrots for your snack”). It’s just that the structure, and the choices we present our kids, need to reflect their new developmental drives and motivations. They need an element of danger.

Which is why we need to give kids opportunities to fall off horses. Teens are driven to take risks. Although we, as parents, are usually motivated to reduce the risks they take, our energy would be better spent steering them toward healthy risks. We can structure their environments so that they have lots of opportunities to fail—in ways that won’t harm them too severely.

Michael Mulligan, head of the Thacher School (of which I’m a board member), calls this giving kids “carefully calibrated opportunities for failure.” Teens will shy away from positive risk taking that might make them look uncool in front of their peers, but despite intense fear, they will rush toward risks that can help them gain social status. (Notice that the kid in the video is wearing a vest that indicates his status as #1 rider.)

When adults like Mulligan deliberately structure a school culture and environment that grants status to those who take risks—risks “carefully calibrated” by adults behind the scenes—teens thrive.

On the other hand, the consequences can be dire when we don’t bridge the gap between teens’ increased desire to take risks and their still-immature control systems.

Just as kids who don’t get enough sleep are at greater risk for depression, anxiety, and a whole host of things we don’t want for them, kids who don’t have opportunities to take positive risks—like a chance at a game-winning shot, or to play in a band in front of their peers—often take negative risks that land them in the hospital, in trouble with the law, or even worse. They do the “stupid” things that teens are known for.

Sometimes, teens need opportunities to leap despite the odds that they will fall down. Teens need adults who are involved enough to create those “carefully calibrated opportunities for failure,” and who are brave enough to let them fail, so that they might learn to get up on their own.

What risks did you take as a teenager? Were they healthy risks? Would you want your own kids to take the same ones? 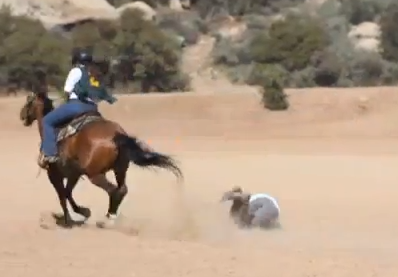