Everyone’s worried about smartphones. Headlines like “Have smartphones destroyed a generation?” and “Smartphone addiction could be changing your brain” paint a bleak picture of our smartphone addiction and its long-term consequences. This isn’t a new lament—public opinion at the advent of the newspaper worried that people would forego the stimulating pleasures of early-morning conversation in favor of reading the daily. 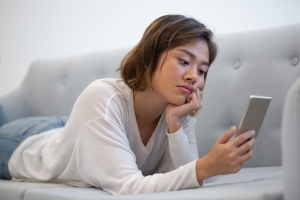 Is the story of technology really that bad? Certainly there’s some reason to worry. Smartphone use has been linked to serious issues, such as dwindling attention spans, crippling depression, and even increased incidence of brain cancer. Ultimately, though, the same concern comes up again and again: Smartphones can’t be good for us, because they’re replacing the real human connection of the good old days.

Everyone’s heard how today’s teens just sit together in a room, texting, instead of actually talking to each other. But could those teenagers actually be getting something meaningful and real out of all that texting?

The science of connection

A quick glance at the research on technology-mediated interaction reveals an ambivalent literature. Some studies show that time spent socializing online can decrease loneliness, increase well-being, and help the socially anxious learn how to connect to others. Other studies suggest that time spent socializing online can cause loneliness, decrease well-being, and foster a crippling dependence on technology-mediated interaction to the point that users prefer it to face-to-face conversation.

It’s tempting to say that some of these studies must be right and others wrong, but the body of evidence on both sides is a little too robust to be swept under the rug. Instead, the impact of social technology is more complicated. Sometimes, superficially similar behaviors have fundamentally different consequences. Sometimes online socialization is good for you, sometimes it’s bad, and the devil is entirely in the details.

This isn’t a novel proposition; after all, conflicting results started appearing within the first few studies into the internet’s social implications, back in the 1990s. Many people have suggested that to understand the consequences of online socialization, we need to dig deeper into situational factors and circumstances. But what we still have to do is move beyond recognition of the problem to provide an answer: When, how, and why are some online interactions great, while others are dangerous?

As a scientist of close relationships, I can’t help but see online interactions differently from thinkers in other fields. People build relationships by demonstrating their understanding of each other’s needs and perspectives, a cyclical process that brings them closer together. If I tell you my secrets, and you respond supportively, I’m much more likely to confide in you again—and you, in turn, are much more likely to confide in me.

This means that every time two people talk to each other, an opportunity for relationship growth is unfolding. Many times, that opportunity isn’t taken; we aren’t about to have an in-depth conversation with the barista who asks for our order. But connection is always theoretically possible, and that’s true whether we’re interacting online or face-to-face.

Close relationships are the bread and butter of happiness—and even health. Being socially isolated is a stronger predictor of mortality than is smoking multiple cigarettes a day. If we want to understand the role technology plays in our well-being, we need to start with the role it plays in our relationships.

And it turns out that the kind of technology-mediated interactions that lead to positive outcomes are exactly those that are likely to build stronger relationships. Spending your time online by scheduling interactions with people you see day in and day out seems to pay dividends in increased social integration. Using the internet to compensate for being lonely just makes you lonelier; using the internet to actively seek out connection has the opposite effect.

On the other hand, technology-mediated interactions that don’t really address our close relationships don’t seem to do us any good—and might, in fact, do us harm. Passively scrolling through your Facebook feed without interacting with people has been linked to decreased well-being and increased depression post-Facebook use.

That kind of passive usage is a good example of “social snacking.” Like eating junk food, social snacking can temporarily satisfy you, but it’s lacking in nutritional content. Looking at your friends’ posts without ever responding might make you feel more connected to them, but it doesn’t build intimacy.

Passive engagement has a second downside, as well: social comparison. When we compare our messy lived experiences to others’ curated self-presentations, we are likely to suffer from lowered self-esteem, happiness, and well-being. This effect is only exacerbated when we consume people’s digital lives without interacting with them, making it all too easy to miss the less photogenic moments of their lives.

The interpersonal connection behaviors framework doesn’t explain everything that might influence our well-being after spending time on social media. The internet poses plenty of other dangers—for two examples, the sense of wasting time or emotional contagion from negative news. However, a focus on meaningful social interaction can help explain decades of contradictory findings. And even if the framework itself is challenged by future work, its central concept is bound to be upheld: We have to study the details of how people are spending their time online if we want to understand its likely effects.

In the meantime, this framework has some practical implications for those worried about their own online time. If you make sure you’re using social media for genuinely social purposes, with conscious thought about how it can improve your life and your relationships, you’ll be far more likely to enjoy your digital existence.