The other day when I wasn't giving Molly exactly what she wanted exactly when she wanted it, she yelled at me "If I can't have a playdate with Claire right now, then I am never going to hug you again!"

Made me realize I am really in a bad habit of bribing and threatening the kids to get them to do what I want. "If you brush your teeth right now, then we'll have time for an extra story!" or "If you don't get in the car right now, then we aren't going to listen to High School Musical." Clearly these "If, Then" statements were coming so fast and furiously from me that now my 6-year-old was using them, too. 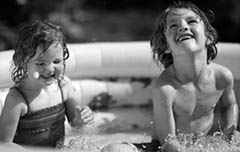 Coincidentally, I've also been reviewing the research on rewarding kids, and it is really making me rethink the series of postings I had on forming happiness habits; my method most definitely involved using rewards to goad kids into getting into good habits. Rewards work in the short-term, but research shows that they back-fire in the long run. So I'm revising and reposting the happiness habits articles.

The core premise of this blog is that happiness is a skill set that parents can teach to their kids. If we want to be happy, and if we want our children to be happy, we have to learn how to turn the skills presented in this blog, and the positive skills we already have, into automatic habits. But like most parents, I've also been teaching my kids habits that foster negative emotions rather than positive ones. For example, both of my kids have been in the annoying habit of waiting until the 10th time I'd asked them to do something before they did it. This was a frustration-fostering habit on my end, and because I often threw in a few random threats for added motivation, a fear-fostering habit on their end.

Most of us have some routines with our children that just aren't working but that we continue to replay day in and day out anyway. My friend R.'s nightly homework battle with her 8th grader leaves her depleted and frustrated and her son distant and grouchy. These bad habits make us unhappy. How do we break such frustration-fostering habits? How do we instill happiness habits in their place?

One big key to happiness is making the everyday unfun things in life into automatic routines, so that we don't have to fight the urge not to do them day in and day out.

For that, parents and teachers often use rewards. Good, juicy, rewarding rewards.

When we engage in certain activities (such as eating and, for adults, having sex and taking certain drugs), dopamine is released, creating feelings of enjoyment and an accompanied desire to repeat the activity. Researchers believe that when we reward kids, we stimulate the release of this feel-good brain chemical, and when a reward is consistently associated with a behavior, this dopamine-release helps make the behavior an into a habit. Animals, insects, kids, grown-ups: we all learn to repeat
behaviors that lead to really good rewards.

The great thing about dopamine is that it is all about the motivation and not so much about the activity. So my kids don't actually have to enjoy emptying the dishwasher, they just need to feel rewarded for doing it.

But all this neuroscience aside, rewarding children is controversial in the scientific community. Most researchers agree that it isn't a great way to motivate behavior over the long run. The same goes for my habit of punishing kids and threatening them with "consequences". (As in: "Do that again and there will be no computer games for a week.")

But you have no idea how many parents wrote to me thanking me for giving them permission to use rewards; in theory no-rewards no-punishment parenting sounds good (if you've read anything by Alphie Kohn), but it doesn't come naturally to most of us.

I think I've found a better way: one that works in the short-term and doesn't backfire in the long run. The next several postings will be about how to help kids successfully break bad habits and replace them with good ones without using material rewards. Stay tuned!

Thanks for this, Christine.  I work in a public school setting in special education and see rewards and punishments doing exactly the opposite of what the teachers are trying to accomplish with their students.  I feel them slip into my own parenting especially when my own resources are low.  But when I’m more conscious, I find Becky Bailey’s work with Conscious Discipline to be a great track to follow.  Are you familiar with it?

I love the discussion of habits. Look what popped into my inbox this morning:

“Excellence is an art won by training and habituation. We do not act rightly because we have virtue or excellence, but rather we have those because we have acted rightly. We are what we repeatedly do. Excellence, then, is not an act but a habit.”  Aristotle

The guy over on Game Theory had a good commentary on using incentives (both+ and -). The understanding I got is generally setting out incentive guidelines ahead of time so there is no sense of negotiation. If toy removal is the immediate, consistent consequence of throwing a toy, it is NOT the wrath of an angry parent, and everyone knows what to expect. Likewise, if finishing homework early gets an extra half hour of tv, it’s not a BRIBE, it’s just the way things work. In the heat of the moment is not the best time to have a rewards/consequences discussion. Don’t have his site off hand, but you’ll find it if you search for Parentinomics. I think his name is Joseph something.

We nearly always do something because of a “reward” of some kind…I think what you really mean is avoiding externally imposed and unrelated rewards and consequences. Tying what a child does to the natural consequences of that action allows them to tap in to the intrinsic rewards of positive actions and the negative consequences of not-so-positive actions. Brushing your teeth will keep them healthy and make them feel nice – using this as motivation, instead of an externally imposed reward, is in line with the idea of natural consequences. Showing children the intrinsic rewards that come with a job well done can help them experience the same thing – “I feel really proud of this horse I made because it looks just like a real one!” or “This pizza we made tastes delicious!”

Thanks for this.
I love your work but did not agree with using rewards to form good habits, despite the dopamine. It is such a slippery slope.
Looking forward to your practical tips to help without bribes.
All the best,

Can’t wait! I’ve been thinking the exact same thing lately, especially since, as kids become adults, they will not be constantly receiving rewards (or punishments) for those things that we all have to do each day.

Christine,
I’m sure you’re familiar with Carol Dweck’s work when she was back east and now

at Stanford.  The topics she focuses on with children might be ideas for some of your

I love Carol Dweck’s work, and I think it is VERY important.  Here are some videos and postings that draw on her work:
The Psychology of Success

http://greatergood.berkeley.edu/half_full/?p=56
How To Make Your Kid into a Perfectionist

http://greatergood.berkeley.edu/half_full/?p=298
How to Stop Being a Perfectionist