Today, prejudice against people who don’t share our race, ethnicity, gender, religion, or political persuasion is creating an atmosphere of distrust and hostility that is dividing the United States. Citizens and researchers alike are desperate to understand where these divisions come from and how to heal them.

Some answers might be found in the scientific literature on mindfulness. 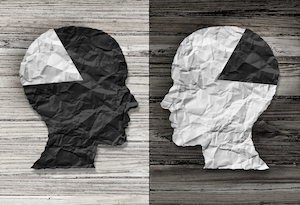 For those who don’t know, mindfulness is a state of being—often practiced through meditation—that involves an increased awareness of our emotions, thoughts, and surroundings, accompanied by a sense of acceptance and non-judgment. Several studies have suggested that practicing mindfulness can reduce prejudice and bias.

For example, one study found that a brief loving-kindness meditation reduced prejudice toward homeless people, while another found that a brief mindfulness training decreased unconscious bias against black people and elderly people. In a third study, by Adam Lueke and Bryan Gibson, white participants who received a brief mindfulness training demonstrated less biased behavior (not just attitudes) toward black participants in a trust game.

But how does mindfulness have this impact? This is a crucial question, if we want to design activities and programs to help people bridge their differences, and to understand our own personal obstacles.

A flurry of recent studies are starting to explore this, and they support the idea that mindfulness may target prejudice indirectly, by lessening our cognitive biases—automatic, systematic errors in our thinking—in ways that impact our judgments of other people. By reducing our susceptibility to cognitive biases, mindfulness could play a role in improving social relationships in our society.

1. Mindfulness helps us see the full context for people’s actions

Humans have a natural tendency to see people’s actions as reflective of stable character traits rather than external factors. So if a student doesn’t pass his math test, you may decide he’s not good at math or lazy, rather than thinking that he didn’t get a good night’s sleep.

This tendency to ignore circumstances is called the correspondence bias, and it impacts how we judge people, including people of different social groups.

It’s easy to see how this plays out in real life. When Hurricane Katrina hit New Orleans, many white Americans assumed the residents who stayed were stubborn, rather than simply too poor to evacuate. Research also suggests that this bias plays a role in the courtroom, where juries often dismiss mitigating circumstances when assigning punishment, especially for people of color.

But mindfulness can help us fight this tendency in ourselves.

In a recent study by Tim Hopthrow and colleagues, participants were divided into three groups and given either a brief mindful eating exercise, a task that required them to pay attention to detail, or neither (serving as a control). Afterwards, the participants read an essay that was either pro- or anti-nuclear power, with the understanding that the writer hadn’t chosen their position—it was assigned. They then rated how strongly they believed the writer was for or against nuclear power.

Results showed that participants in the mindfulness group were significantly less willing to equate the position taken in the writer’s essay with their true beliefs than those in the other two groups. In other words, they were less likely to fall prey to the correspondence bias.

These results suggest that mindfulness could play a role in decreasing a bias that we use to pigeonhole people, which could benefit all social relationships, but particularly cross-group interactions.

When we understand that someone may be acting in a certain way because of pressures they face or situations they find themselves in—rather than personal attributes—we may be more empathic and better able to bridge misunderstandings that arise between us. 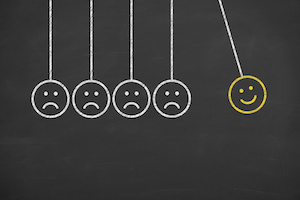 Most of us naturally pay more attention to and react more strongly to negative events than positive events in our lives—a phenomenon called the negativity bias. This is due to our early evolutionary history, where being vigilant counted heavily for our survival.

Having a strong negativity bias can make us extra cautious about entering situations where we anticipate that something bad might happen. And research shows that interactions with people from different social groups can be stressful, in part because we worry about being rejected—a strongly negative experience for most people. For those with high negativity bias, fear of rejection is even more of a barrier.

But mindfulness can help reduce our negativity bias and consequently help us to be less wary of negative social encounters. Support for this claim comes from experiments looking at how mindfulness impacts our emotional reactivity to negative stimuli.

More mindful participants were less reactive to negative photos and showed higher indications of positive feeling when seeing the positive photos. This was assessed via brain patterns associated with reactions to distress. According to the authors, this supports the contention that mindfulness decreases the negativity bias—something other studies support, too.

In another study, some participants in an fMRI machine were given a short mindfulness instruction—to “consciously be aware of yourself, of what happens to you at this moment,” without judgment—before being told to expect photos depicting negative events, and then seeing the photos. Those who’d received mindfulness instruction showed increased activation in the prefrontal cortex of the brain and decreased activity in the amygdala—a pattern associated with less emotional reactivity—before seeing the photos and while seeing them. This suggests that even a short mindfulness teaching may help people handle anxiety-inducing experiences in a healthier way.

And that includes negative social situations. In one study, participants reported on their fear of being ostracized in social encounters, self-esteem, and mindfulness levels. The researchers found that although participants with low self-esteem had a greater fear of being rejected, being more mindful decreased those effects.

Taken together, these studies suggest that mindfulness can decrease our emotional reactivity to negative events, potentially leading to less social friction in more uncertain, anxiety-producing situations.

3. Mindfulness may help us see others as equals 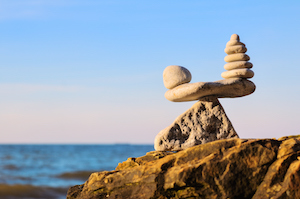 Another common psychological bias is the self-positivity bias: the need to hold onto positive views of ourselves in comparison to others. This can sometimes lead us to want to put others down to make ourselves look good. The self-positivity bias is at work when we assume that our boss’s critique of our workgroup’s project has nothing to do with us, for example.

But in at least one study, mindfulness has been shown to decrease the self-positivity bias, suggesting another way it could be useful to our social relationships.

Here, participants received either a 15-minute talk on the benefits of mindfulness, 15 minutes of mindfulness meditation, or 15 minutes of loving-kindness meditation. Then, participants viewed photos of themselves or of strangers and had to pair the photos with either positive or negative words, depending on the instructions they were given. Self-positivity bias was measured by how easily they associated themselves with positive words and strangers with negative words.

Though this research is still relatively preliminary, others have made the case that mindfulness helps us to keep a strong sense of self while also increasing our empathy with and care for those who are different—something you’d expect of people with low self-positivity bias. In fact, these and other benefits of mindfulness training have led some to suggest that attorneys and doctors consider mindfulness practices as part of the solution for reducing implicit biases they may have toward clients and patients.

While it’s clear that mindfulness impacts our personal well-being, it’s becoming clearer how it may also influence our social well-being. By reducing the correspondence bias, negativity bias, and self-positivity bias, mindfulness can help us have better relationships with others—including those who look and behave differently.

Given how defensive people can be about receiving training to reduce racism, Lueke believes teaching mindfulness in general may be particularly useful. If mindfulness training has these benefits without actually targeting bias directly, it might be more palatable than specific bias reduction programs, he says.

“If you tell people that they’re prejudiced and racist, and that you’re going to try to fix that, people become defensive,” he says. “The fact that mindfulness is not specifically targeted toward reducing discrimination—and that it carries all these personal benefits, like less stress, greater life satisfaction, etc.—is very positive, because people won’t have their guards up.”

Perhaps if we want to get along better, we could do worse than starting with mindfulness. After all, what have we got to lose?