Jaime attended the same undergraduate institution as both of the authors. When Larry Happel wrote about Jaime’s story for Central College, Chris Hulleman immediately recognized the psychological factors at play in Jaime’s journey. In this article, Hulleman and Happel come together to share Jaime’s story and explain what it can teach us about the psychology of navigating life’s transitions and challenges. 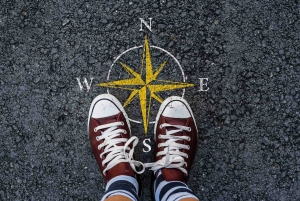 A "mindset GPS" can help students overcome challenges en route to their goals.

Jaime’s story is an extreme, but not rare, example of the obstacles that students can face on their educational journeys. They might have been homeless, like Jaime, or come from families with limited financial resources. Or they may be the first in their family to attend college and have little knowledge of how to navigate the institutional waters.

Even students with distinct advantages—such as having wealthy, college-educated parents—can struggle with the transition to college. Transitioning to anything new—a job, a relationship, living in a new place—can take time. Students transitioning to college are navigating all of these things simultaneously. Feeling uncertain, out of place, and unprepared is common. More than half of college students fail to graduate within three years (at two-year colleges) or six years (at four-year colleges) and are then saddled by debt without the perks of a college degree.

Despite the tremendous financial, social, and other systematic obstacles in his way, Jaime made it through college and earned his degree. How? And what can we learn that might help other students who face similar obstacles to succeed?

As we’ll explain, Jaime’s story illustrates how, with the help of a supporting cast of family members, professors, coaches, and teammates, he was able to navigate life’s challenges. From the perspective of a scientist who studies motivation (Chris), Jaime’s story revealed how different psychological mindsets can work together to help students succeed, especially those with the odds against them.

Psychologists define mindsets as the attitudes, beliefs, and perceptions about ourselves, other people, and the environments we’re in. In particular, there are three mindsets that can help students persist. One way to remember these three mindsets is through the acronym GPS:

The G stands for Growth.

The P stands for Purpose.

The S stands for Social.

The point of mindset GPS is not that humans can, or should, persevere through every challenge or negative life situation—there are some situations that are genuinely toxic that no amount of the right attitude can overcome. Rather, mindset GPS is one of many tools to help overcome life’s common challenges and accomplish our goals.

G is for growth

When his wrestling coach learned that Jaime was failing several courses, his message was direct. “School is hard. So what?” said his coach. “It’s hard for a lot of people. They figured it out. You can figure it out, too.” And so Jaime sought out his professors in office hours and extra tutoring from his peers. As his grades climbed, so did his confidence that he could make it academically.

One way to overcome diverse challenges is to cultivate a growth mindset. Coined by social psychologist Carol Dweck, growth mindset refers to a person’s belief that skills and abilities can develop, especially through hard work, trying challenging things, learning from failure, and adjusting strategies to accomplish goals. When we adopt a growth mindset, we are more likely to stick with things longer, perform better, and enjoy what we’re doing more than when we believe that our skills and abilities are fixed.

Fortunately, it’s possible to change someone’s mindset and therefore improve their ability to handle challenge. Numerous studies show that interventions can help students develop a growth mindset. Growth mindset interventions tend to provide students with scientific information about how the brain changes (i.e., neuroplasticity) through challenge, failure, and subsequent learning. For example, Lisa Blackwell and her colleagues found that giving seventh-grade students a growth mindset message plus study-strategy lessons, compared to simply giving students study-strategy lessons, increased their math achievement later in the year. The key is to help students believe that effort can make a difference.

How does a growth mindset help when transitioning to something new? It helps students focus on what is in their control and reduces the crippling fear that they may be stuck in their current state forever. It helps them be proactive instead of reactive or disengaged. Instructors or mentors can encourage students to not simply keep trying but to evaluate the strategies they are using. If a student keeps trying to study the same way and keeps failing, instructors can encourage the student to try a new approach, take risks when learning, and get feedback often.

Jaime struggled academically when he first came to college. Fortunately, his wrestling coach encouraged him to have a growth mindset. His coach encouraged him to seek additional help and try new learning strategies. Rather than taking the negative feedback about Jaime’s academic performance as an indictment of his lack of ability, Jaime’s coach sent a different message. Poor performance was a behavior to overcome rather than an innate predisposition to do poorly in school.

P is for purpose

“I wanted to go to college because I want to make something of myself. . . . I could go on and on about all my mom did for me and all she went through. A lot of people couldn’t make it a day in her shoes. I just made the decision when she passed that I’m going to make a legacy to her. I want to help kids where I came from. People are going to see me helping change the world, and they’re going to see my mom,” said Jaime.

When people find meaning and purpose in their life—whether it’s something grand like curing cancer or more modest like connecting with friends—they persist longer, enjoy what they’re doing more, and feel better about their lives.

Research finds that when students in middle school, high school, and college are able to connect what they are learning in school to what is important in their life, they learn more and become more interested in school. For example, ninth-grade science students who were prompted by their teachers to write brief essays about how what they were learning in class related to their lives—compared to other students who write a summary of the topic they were learning—improved their semester grade by nearly one full letter grade. Other studies of similar purpose interventions find improved learning outcomes for students in high school math, college biology and statistics, and standardized college placement exams.

To cultivate purpose, instructors or mentors can encourage students to reflect on how attending school aligns with their core values. They can ask them how taking specific classes gets them closer to their goals. Reflecting on questions like these will help students home in on what’s important to them. For Jaime, his purpose was leaving a legacy for his mother. He realized that quitting school would not help him achieve that legacy.

S is for social

The longer he stuck it out, the more Jaime started to feel accepted by his teammates, who seemed to understand and accept him the longer he stayed at Central. The parents of two of his Central College wrestling teammates who had graduated the year before still came to watch his meets, and waited to talk to him after the match. Jaime wanted to be a father like they were to him. This acceptance helped free him of his anger, which had been his biggest obstacle, and clarified a purpose—no, a mission—that he had for his life: to leave a legacy of helping others in similar situations, just as his mother had done everything to keep Jaime and his siblings safe and warm.

Wanting to fit in and make social connections is a fundamental part of being human. But making social connections can take time. Research on social belonging shows that when people start something new, they often feel they’re the only one struggling and that these struggles are a permanent part of the experience. This often leads students to assume they aren’t cut out for school. This is especially true when students experience adversity, such as failing an exam.

But research shows that these feelings of uncertainty tend to be temporary and fade over time. Greg Walton and colleagues found that intervening with students as they transition into college can have powerful effects. Their intervention was designed to help students reframe adversity in the transition to college as both common and temporary. Across several studies, Walton and colleagues found that the belonging intervention boosts persistence, grades, and well-being compared to the control group. This was particularly true for students who were most likely to experience stereotype threat—the risk of conforming to stereotypes about your own group—such as underrepresented minority students or women in STEM fields.

Students benefit from knowing that fitting in is a challenge that’s common and often temporary. This reminds them that being new and different doesn’t mean they don’t belong. Most people grow more comfortable in a place over time. The more students interact with others, the sooner they can build relationships and make friends. To help students develop a social mindset, instructors and mentors can remind them that others probably feel uncomfortable at first, too, and may be waiting for someone else to reach out. Encouraging students to step outside their comfort zone and ask a peer to lunch or helping them start a study group before an exam can go a long way to establishing new relationships.

As Jaime felt more accepted by his teammates and their families, he began to let go of his anger, which was his biggest obstacle to adapting to the challenges of college. Without the constant anger, he was free to become the best wrestler, and person, that he could be.

Mindsets are social. Having an adaptive mindset isn’t just about the rugged individual figuring it out on his or her own. Mindsets are also part of the social context. They can be taught and supported by caring adults. It starts with institutions recognizing that helping students be successful also includes helping them adopt the learning mindsets that will help them navigate the challenges and struggles of life.

Students often struggle when starting new things, not because there is something wrong with them, but because it’s tough starting something new. This is especially true for students who are also navigating other significant life obstacles. Not only do these students need guidance on how to apply for financial aid or register for classes, they need support and encouragement to adopt the mindsets that can help them be successful.

“I finally learned to be proud of myself, of where I am and how far I’ve come. It’s pretty cool, I think,” said Jaime.

When you encounter a student (or a friend or colleague) who is feeling uncertain, encourage them to use their mindset GPS. Help them keep a growth mindset, look for things in the new situation that give them purpose and meaning, and allow them time to make social connections.

Disclosure: Chris Hulleman and Behavioral Scientist Editor-in-Chief, Evan Nesterak, are co-founders of a company that operates in the domain of psychology and sports.