The research on dads this year may not be as salacious as, say, the theories about why dad-to-be Anthony Weiner would risk his career and marriage by sending narcissistic and semi-nude photos of himself to women. But the kind of post I’m tempted to write about that (e.g., “How Not to Raise a Weiner”) is clearly not appropriate for Father’s Day.

Still, I can’t help writing about sex and fathers. But before I do, I’d like to send out a cheer for the ways that dads are helping out more with all the glamorous unpaid household labor that has been “women’s work” in previous generations. 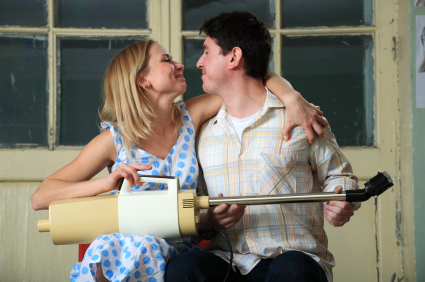 Although we sociologists (and, er, women) can often be heard bemoaning how slow men are to change—i.e., how relatively little they do around the house compared to moms (on average…I know, I know, not you...other men)—when you take a long view of the statistics, the data are actually encouraging. While sociologists often refer to a “stalled gender revolution,” or a revolution that women started by entering the paid workforce but that men stalled by not taking on a proportional amount of unpaid family work, what we are actually seeing is a SLOW, rather than a stalled, revolution. Evidence that this is the case:

• Men ARE, in fact, contributing substantially more to household tasks. Their contributions have at least doubled compared to the work they did in the 1970s.

• The number of single dads—dads who are raising kids on their own, or who have substantial custody arrangements in which kids live with them for a considerable proportion of time—has also doubled in the past decade.

• The number of primary-caregiving stay-at-home dads has increased by 214 percent since 1996.

• Our cultural definitions of masculinity are changing. Although this is difficult to measure scientifically, this is an important trend, as individual attitudes are the precursor to practical change. Men who don’t believe housework and childcare are their responsibility are unlikely to do it. On the other hand, men who include family work in their conceptions of masculinity are likely to take it on.

One more indicator of this cultural (and practical) shift: The number of sitcoms launching this fall that feature the new-and-improved dad. “The 2011 sitcom man may be effete compared with his predecessors,” writes a Wall Street Journal reviewer, “but he’s confident, devoted to his family, happy working around the house, pretty good at child-rearing.”

That article actually goes so far as to quote trend-watcher Jack MacKenzie declaring the women’s movement a success: “The equal-rights movement actually worked, and as a result those [kids who were] brought up in a totally different environment in which girls could do all the things boys did, see a blurring of the [gender] lines now that they’re adults.”

Hooray dads! Thank you for getting on board. Change has been slow, but because that change has been steady, I believe it is here to stay. I’ve always maintained that slow and steady—but long-lasting—change for individuals is far better than dramatic-but-short-lived change. Turns out that this is true for societies, as well!

There’s more happy news in this Father’s Day story. Research shows that when men do more housework, women are more satisfied with their marriages, and couples fight less. Moreover, couples who consider their division of household labor fair (it doesn’t have to be 50/50, but the wife has to think it is fair) have sex more frequently!

Though many women find men doing housework hot (choreplay, anyone?), who knows whether men performing family work is the chicken or the egg. What we do know is that when men do their share around the house, their marriage is likely to be healthier—and sexier.

Talk to me: Do you think that “the equal-rights movement actually worked”?  Do you think a fair division of household labor (including childcare) contributes to happiness in your household?