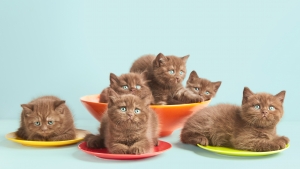 Cats may wake us up at 4 a.m. and barf at an alarming frequency, yet anywhere between 10 to 30 percent of us call ourselves “cat people”—not dog people, not even equal-opportunity cat and dog lovers. So why do we choose to bring these fluffballs into our homes—and spend over $1,000 per year on one who isn’t genetically related to us and frankly seems ungrateful most of the time?

The answer is obvious to me—and probably to all cat lovers out there, who need no scientific research to justify their fierce love. But scientists have studied it anyway and found that, while our feline friends may not be good for our furniture, they might make some contribution to our physical and mental health.

According to one Australian study, cat owners do have better psychological health than people without pets. On questionnaires, they claim to feel more happy, more confident, and less nervous, and to sleep, focus, and face problems in their lives better.

Adopting a cat could be good for your kids, too: In a survey of more than 2,200 young Scots ages 11-15, kids who had a strong bond with their kitties had a higher quality of life. The more attached they were, the more they felt fit, energetic, and attentive and less sad and lonely; and the more they enjoyed their time alone, at leisure, and at school.

With their gravity-defying antics and yoga-like sleeping postures, cats may also cajole us out of our bad moods. In one study, people with cats reported experiencing fewer negative emotions and feelings of seclusion than people without cats. In fact, singles with cats were in a bad mood less often than people with a cat and a partner. (Your cat is never late for dinner, after all.)

Even Internet cats can make us smile. People who watch cat videos online say that they feel less negative emotion afterward (less anxiety, annoyance, and sadness) and more positive feelings (more hope, happiness, and contentment). Admittedly, as the researchers found, this pleasure becomes a guilty one if we’re doing it for the purpose of procrastination. But watching cats annoy their humans or get gift-wrapped for Christmas does seem to help us feel less depleted and regain our energy for the day ahead.

I can attest that a warm cat on your lap, giving your thighs a good kneading, is one of the best forms of stress relief. One afternoon, feeling overwhelmed, I said aloud, “I wish Cora would sit on my lap.” Lo and behold, she trotted over and plopped down on me seconds later (though attempts to replicate this phenomenon have been unsuccessful).

In one study, researchers visited 120 married couples in their homes to observe how they would respond to stress—and whether cats were any help. Hooked up to heart rate and blood pressure monitors, people were put through a gauntlet of daunting tasks: subtracting three repeatedly from a four-digit number, and then holding their hand in ice water (below 40 degrees Fahrenheit) for two minutes. People either sat in a room alone, with their pet roaming around, with their spouse (who could offer moral support), or both.

Before the stressful tasks began, the cat owners had a lower resting heart rate and blood pressure than people who didn’t own any pets. And during the tasks, the cat owners also fared better: They were more likely to feel challenged than threatened, their heart rate and blood pressure were lower, and they even made fewer math errors. Out of all the various scenarios, cat owners looked the most calm and made the fewest errors when their cat was present. In general, cat owners also recovered faster physiologically.

Why are cats so calming? Cats won’t judge us for our poor math skills, or become overly distressed when we’re distressed—which explains why cats were actually a more calming influence than significant others in some cases.

As Karin Stammbach and Dennis Turner of the University of Zurich explain, cats aren’t simply small beings who are dependent on us. We also receive comfort from them—there’s an entire scientific scale that measures how much emotional support you get from your cat, based on how likely you are to seek them out in different stressful situations.

Cats offer a constant presence, unburdened by the cares of the world, that can make all our little worries and anxieties seem superfluous. As journalist Jane Pauley said, “You cannot look at a sleeping cat and feel tense.”

Cats are beings we care for and who care for us (or at least we believe they do). And people who invest in this cross-species bonding may see benefits in their human-to-human relationships, as well. 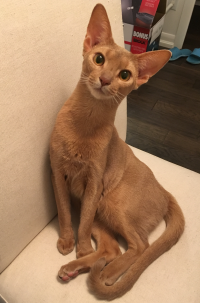 While these correlations may seem perplexing, it makes sense if you consider cats just one node in your social network.

When someone—human or animal—makes us feel good and connected, it builds up our capacity for kindness and generosity toward others. As that study of Scottish adolescents found, kids who communicate well with a best friend are more attached to their cats, probably because they spend time playing as a trio.

“Pets appear to act as ‘social catalysts,’ inducing social contact between people,” write U.K. researcher Ferran Marsa-Sambola and his colleagues. “A pet can be accepting, openly affectionate, consistent, loyal, and honest, characteristics that can fulfill a person’s basic need to feel a sense of self-worth and loved.”

Finally, despite what you might have heard about kitty-to-human brain parasites, there’s a smattering of evidence that cats could be good for our health.

In one study, researchers followed 4,435 people for 13 years. People who had owned cats in the past were less likely to die from a heart attack during that time than people who had never owned cats—even when accounting for other risk factors like blood pressure, cholesterol, smoking, and body mass index.

This was true of people even if they didn’t have cats currently, the researchers explain, which suggests that cats are more like preventative medicine than treatment for an ongoing disease.

In another study, James Serpell of the University of Pennsylvania followed two dozen people who had just gotten a cat. They completed surveys within a day or two of bringing their cat home and then several times over the next 10 months. At the one-month mark, people had reduced health complaints like headaches, back pain, and colds—although (on average) those benefits seemed to fade as time went on. As Serpell speculates, it’s possible that people who form a good relationship with their cat continue to see benefits, and people who don’t, well, don’t.

Much of this research on cats is correlational, which means we don’t know if cats are actually beneficial or if cat people are just already a happy and well-adjusted group. But unfortunately for us cat lovers, the latter doesn’t seem to be the case. Compared to dog lovers, at least, we do tend to be more open to new experiences (even if our skittish cats aren’t). But we’re also less extraverted, less warm and friendly, and more neurotic. We experience more negative emotions and suppress them more, a technique that makes us less happy and less satisfied with our lives.

On the bright side, that means it’s more likely that cats actually do bring us as much delight and joy as we claim they do, although the research is far from conclusive. In fact, the vast majority of pet research focuses on dogs, partly because they’re easier to train as therapy assistants. “Cats have been left behind a bit by the research,” says Serpell. Yet another bone to pick with our canine counterparts.

While we’re waiting for more data, I will continue to gush to everyone I meet about how happy I am to have a cat in my life—and in my bed, on my dining table, and watching me go to the bathroom. What I lose in sleep I make up for in soft, furry love.