Anyone familiar with Daniel Goleman’s 1995 best-seller, Emotional Intelligence, is likely to believe emotional intelligence is a skill that serves the greater good.

That’s not always true, according to a forthcoming study, which suggests that people with high emotional intelligence—meaning that they have a strong ability to identify what they’re feeling and keep their emotions from getting the better of them—can use that skill for good or bad. 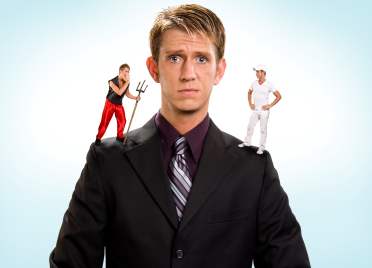 The study consisted of two separate experiments. In both experiments, participants first took a survey that measured how well they could manage their emotions to suit the needs of a given situation—a skill called “emotion regulation,” which is an important part of emotional intelligence. If a co-worker fails to deliver an important part of a project you’re working on together, explain the researchers, and you respond by strongly encouraging him to do better without blowing your top—that’s emotion regulation.

In the first experiment, the participants also completed a questionnaire that assessed how strongly they wanted to see themselves as a caring, moral person, which the researchers call their “moral identity.”

Then they played a game that pitted the common good against their own self-interest: They could take a limited number of points from a common lottery pool. The more points they took, the greater their odds of winning a lottery. But if all the points got depleted from the pool—which would happen if everyone took the highest number of points available to them—there would be no lottery at all.

The results, which will be published in the journal Psychological Science later this year, show that people with a strong moral identity were more considerate of others—and they were significantly more considerate if they were also good at regulating their emotions.

The second experiment involved a different set of participants, who took a questionnaire that determined how motivated they were to manipulate others for their own personal gain—a trait known as “Machiavellianism.” Then they reported how often they’d behaved badly toward co-workers, such as by embarrassing them publicly.

The researchers found that people who had stronger Machiavellian impulses were more likely to treat others poorly—and this was especially true if they were also skilled at regulating their emotions.

“Although Machievellians have low emotion regulation knowledge on average,” write the researchers, “Machievellians who know how to regulate emotions effectively are especially harmful.”

So why might emotion regulation give this boost to good and bad behavior alike?

“We think that the ability to regulate emotions just helps people accomplish their goals,” says Stéphane Côté, the study’s lead author and an associate professor of organizational behavior and psychology at the University of Toronto. “When people want to accomplish their goals, there are emotions that are helpful and those that could get in their way.”

For instance, says Côté, guilt or compassion could get in the way of a Machiavellian’s selfish goals; being able to control those emotions could help them act on their nasty desires, just as a moral person would want to temper his selfish impulses in order to help other people.

“It’s the same skill, but it can help people accomplish different goals,” he says.

Côté acknowledges that this research will probably surprise people who assume that emotional intelligence is synonymous with kind, helpful—or “pro-social”—behavior.

“If people’s assumption is that people with high social skills will be more pro-social,” he says, “that’s a faulty assumption.”

Still, he doesn’t think it’s misguided to try to promote positive behavior by teaching emotional intelligence, which is what many social-emotional learning programs try to do in schools.

“Emotional skills are part of the puzzle,” he says, “but they’re not all of the puzzle. These skills are very useful, but like any skill, they will be used pro-socially only if they’re combined with other types of education,” like in ethics.

This is very interesting because it brings into question the workshops and such that teach people how to make a good impression or how to use body language, etc. Could we say that this is just a form of manipulation, perhaps a bit disingenuous?

I thought I remembered a study which showed that sociopaths were of above average intelligence or maybe even they are more skilled at manipulating others.

Good question, Emmy. According to the researchers’ analysis, people who were more emotionally intelligent in this study were more likely to have a “pro-social” orientation, but only very slightly. In other words, if you have high emotional intelligence, there’s a slightly better than average chance you’re pro-social. But Professor Cote stressed to me that this still means there are lots of people out there who are high in EI but who aren’t necessarily committed to helping others. That said, these results suggest that when pro-social people also have high EI, they’re even more pro-social than others.

Right, so good people are good and bad people are bad and those who are also emotionally-intelligent are better at either.

Peter Mandelson comes to mind for some reason…

For me this only give credence to the concept that each of us in large part, chooses how we are and that one can choose their own behavior rather than succumb to the concept that we have no locus of control whatsoever and that the mysterious hand which influences a persons behavior belongs to them.

@Nick, you summed it up perfectly. Emotional intelligence gives us the ability to perform better at whatever we choose to do (good or bad things) It gives us an intellectual advantage.

@Tim, I don’t really get what your point is. Could you explain a bit further?

This article reminds me of an observation I made over time of a person part of extended family.  I first knew him when he was about 12 years old and I was a college student.  I noticed how perceptive he was.  (I think this would be the other side of what’s been discussed here so far).  As a teenager, he used that apparently inborn talent aggressively and could cut a person to the quick in a New York Minute!  As he matured, that changed.  Now, as a husband,father and in early middle -age, he is gentle and kind but, at the same time straightforward and ‘tells it like it is’ if he chooses.  To me he seems to be able to so-called see through people, to an extent and can easily judge good from evil and is not trickable.
It’s always been very interesting to me.

nice pic by the way

This is very interesting because it brings into question the workshops and such that teach people how to make a good impression or how to use body language, etc.

Appropriate, so superb fill are bully and bad fill are bad and those who are also emotionally-intelligent are improve at either. Saint Mandelson comes to intellectual for any reason…

Paula, it sounds like your relative is unconquered and unconquerable.  A very positive trait to have.  The ability to regulate your own emotions shouldn’t be viewed as manipulation.  However if you use our emotions to manipulate others, that is not OK.  Control your emotions for the benefit of yourself and others.  That is being pro-social.

Hi Tiana.  The person I told a bit about is not manipulative at all; I hope that i made that clear.  I think you were adding that part as a comment, right?
He is just someone who somehow sees beneath the surface and it just comes naturally.  As a matter of fact, he is very warm, loving, has a sense of humor and is peaceable.  I looked at your link; it seemed somehow serendipitious that my comment struck a chord with you as the person i mentioned is an indigenous person.

I think that any of us who have any ability whether by nature, by training, or both, to see others more deeply than what might be on the surface, have to be diligent not to use that in a harmful way.

Appropriate, so superb fill are bully and bad fill are bad and those who are also emotionally-intelligent are improve at either. Saint Mandelson comes to intellectual for any reason… ITL Portal

Appropriate, so superb fill are bully and bad fill are bad and those who are also emotionally-intelligent are improve at either. Saint Mandelson comes to intellectual for any reasonVisiting Peru

it. I hope UI can give me some scholarship that can help me pay the big tuition. I hope I can get answer of this problem asap. American Environment

thanks for making this information available