A few years back I realized the biggest herald of the holiday season’s arrival was not Santa at the end of the Macy’s Thanksgiving Day Parade, but the sustained appearance of my own bitchy short-temper.

That’s when I had to accept that there simply weren’t enough hours in the month, and something had to give.  I didn’t want that thing to be me, set out on the curb like a discarded Christmas tree by my own family.
—Nancy Kho, Normalarkey 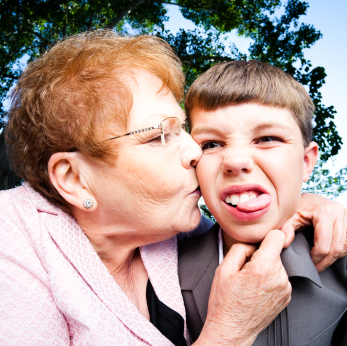 I was going to write a post about how to deal with difficult people during the holidays. So many people I know celebrate this season with relatives who have a track record of irrational behavior.  But then I realized that dealing with difficult relatives can be so hard because it brings up some of our own shortcomings as well—the two are really intertwined.  So here is my advice on both fronts.

(1) Remember that it is not about you. My friend just read me an email that she got from her normally stable mother that essentially said, “You don’t love me enough, and you’re a terrible daughter.”  Another friend, Amy, has a mother who sends her frequent email diatribes at this time of year, usually obsessing about Amy’s life instead of her own.  (Currently, Amy’s mom is worried about Amy’s husband eating meat, when Amy is vegan.  Amy doesn’t care, but strangely, her carnivore mom thinks it is disrespectful.)

This is a stressful time of the year.  When people are upset, they often direct their negative emotions at other people, whether or not that is justified.

Email is a handy tool for this; research shows that when folks send nasty emails, they are most often acting out the negative emotions they were feeling before they wrote the email.

My advice: Ignore nasty emails.  Don’t fan the flames by defending yourself, or even by responding. Take some deep breaths, and hit delete.  The sender will likely apologize later—and maybe even thank you for not making things worse.

(2) Remember that it is probably all about you.  The flipside of #1, above, is that when you are feeling critical of someone, your feelings are probably motivated by your own insecurities.

Recently I found myself criticizing another author for blatant self-promotion, saying she made my stomach turn by hounding her readers to buy her book as a Christmas gift. But then I took a step back and realized: I had recently advertised my online class in my holiday card this year and worried that the self-promotion was too much.  Criticizing the other author was just a defense mechanism. Truth be told, I was anxiously criticizing myself. I’ve never seen any research to prove this, but I know that many psychologists consider it a truism that when we feel critical of others, we might want to stop and take a look in the mirror.

My advice: If you find yourself criticizing another person, consider that you are really critiquing yourself.  Then go a little easier on everyone.

(3) Take steps to not be a “stress ball,” as my daughter recently called me.  More than 90 percent of kids know when their parents are stressed, and for most kids, it makes them feel sad, worried, frustrated—and a whole laundry list of other negative emotions.  Moreover, teen girls report that they are increasingly responding to stress at home by drinking and taking drugs like marijuana and cough syrup.

My advice: Take a little moment for yourself. Meditate.  Get more sleep tonight. Check out James Baraz’s recent Greater Good article for more tips on de-stressing during the holidays.

(4) Practice forgiveness, of yourself and others.  Do this for yourself, and for your children.  Forgive your mother for sending you that horrible email—it will make YOU feel better.  And when you are happier, your children will be too.  Forgive YOURSELF if aren’t able to reduce your stress (see #3, above) and you yell at a family member—guilt isn’t going to help.  Forgive your ex-husband for all his many irritating ways—it will make your kids happier. (Also, forgive his new wife.)

My advice: Zero in on a few people who have aggravated you lately—or who typically get on your nerves during the holidays—and consciously try to practice forgiveness toward them. Clear your heart and mind so that they aren’t fertile ground for the negative emotions that come with holding a grudge.  (For tips about how to forgive, and to teach forgiveness to your children, see this post or this one).

(5) Make New Year’s Resolutions.  I LOVE New Year’s Resolutions.  What better way to clear the air than the blank slate of a New Year!  Model the growth-mindset by spending some time with your family, dreaming of all the ways you can lead a more meaningful life in the coming year.  Thinking big like this often makes the more trivial irritations of the holidays melt away.

My advice: Create a blueprint for happiness by wring down resolutions that will bring you greater happiness.  For example, a resolution to lose 10 pounds will not make you happier—but exercising will!  And don’t forget to help kids make a plan for how to succeed in fulfilling resolutions.  (More on this coming soon!)

How do you cope with holiday irritations and year-end stress?  What do you need to forgive this year in order to have more fun?  What happiness resolutions will you make?