Over the past decade, an entire industry has sprouted up promising the secrets to happiness. There are best-selling books like The Happiness Project and The How of Happiness, and happiness programs like Happify and Tal-Ben Shahar’s Wholebeing Institute.

Here at the Greater Good Science Center, we offer an online course on “The Science of Happiness” and boast a collection of research-based happiness practices on our new website, Greater Good in Action.

But all of these books and classes raise the question: Why bother? Many of us might prefer to focus on boosting our productivity and success rather than our positive emotions. Or perhaps we’ve tried to get happier but always seem to get leveled by setbacks. Why keep trying?

Recently, a critical mass of research has provided what might be the most basic and irrefutable argument in favor of happiness: Happiness and good health go hand-in-hand. Indeed, scientific studies have been finding that happiness can make our hearts healthier, our immune systems stronger, and our lives longer.

Several of the studies cited below suggest that happiness causes better health; others suggest only that the two are correlated—perhaps good health causes happiness but not the other way around. Happiness and health may indeed be a virtuous circle, but researchers are still trying to untangle their relationship. In the meantime, if you need some extra motivation to get happier, check out these six ways that happiness has been linked to good health. 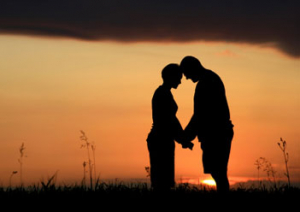 Research has also uncovered a link between happiness and another measure of heart health: heart rate variability, which refers to the time interval between heartbeats and is associated with risk for various diseases. In a 2008 study, researchers monitored 76 patients suspected to have coronary artery disease. Was happiness linked to healthier hearts even among people who might have heart problems? It seemed so: The participants who rated themselves as happiest on the day their hearts were tested had a healthier pattern of heart rate variability on that day.

Over time, these effects can add up to serious differences in heart health. In a 2010 study, researchers invited nearly 2,000 Canadians into the lab to talk about their anger and stress at work. Observers rated them on a scale of one to five for the extent to which they expressed positive emotions like joy, happiness, excitement, enthusiasm, and contentment. Ten years later, the researchers checked in with the participants to see how they were doing—and it turned out that the happier ones were less likely to have developed coronary heart disease. In fact, for each one-point increase in positive emotions they had expressed, their heart disease risk was 22 percent lower. 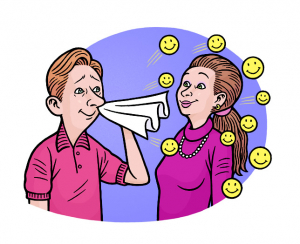 Do you know a grumpy person who always seems to be getting sick? That may be no coincidence: Research is now finding a link between happiness and a stronger immune system.

In a 2003 experiment, 350 adults volunteered to get exposed to the common cold (don’t worry, they were well-compensated). Before exposure, researchers called them six times in two weeks and asked how much they had experienced nine positive emotions—such as feeling energetic, pleased, and calm—that day. After five days in quarantine, the participants with the most positive emotions were less likely to have developed a cold.

Some of the same researchers wanted to investigate why happier people might be less susceptible to sickness, so in a 2006 study they gave 81 graduate students the hepatitis B vaccine. After receiving the first two doses, participants rated themselves on those same nine positive emotions. The ones who were high in positive emotion were nearly twice as likely to have a high antibody response to the vaccine—a sign of a robust immune system. Instead of merely affecting symptoms, happiness seemed to be literally working on a cellular level.

A much earlier experiment found that immune system activity in the same individual goes up and down depending on their happiness. For two months, 30 male dental students took pills containing a harmless blood protein from rabbits, which causes an immune response in humans. They also rated whether they had experienced various positive moods that day. On days when they were happier, participants had a better immune response, as measured by the presence of an antibody in their saliva that defends against foreign substances. 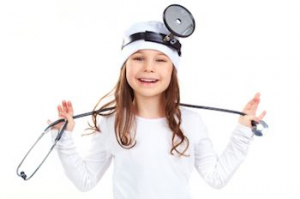 Stress is not only upsetting on a psychological level but also triggers biological changes in our hormones and blood pressure. Happiness seems to temper these effects, or at least help us recover more quickly.

In the study mentioned above, where participants rated their happiness more than 30 times in a day, researchers also found associations between happiness and stress. The happiest participants had 23 percent lower levels of the stress hormone cortisol than the least happy, and another indicator of stress—the level of a blood-clotting protein that increases after stress—was 12 times lower.

Happiness also seems to carry benefits even when stress is inevitable. In a 2009 study, some diabolically cruel researchers decided to stress out psychology students and see how they reacted. The students were led to a soundproof chamber, where they first answered questions indicating whether they generally felt 10 feelings like enthusiasm or pride. Then came their worst nightmare: They had to answer an exceedingly difficult statistics question while being videotaped, and they were told that their professor would evaluate their response. Throughout the process, their heart was measured with an electrocardiogram (EKG) machine and a blood pressure monitor. In the wake of such stress, the hearts of the happiest students recovered most quickly.

Want to learn specific, research-tested steps you can take toward happiness? Check out our new site, Greater Good in Action.

A 2001 study asked participants to rate their recent experience of positive emotions, then (five weeks later) how much they had experienced negative symptoms like muscle strain, dizziness, and heartburn since the study began. People who reported the highest levels of positive emotion at the beginning actually became healthier over the course of the study, and ended up healthier than their unhappy counterparts. The fact that their health improved over five weeks (and the health of the unhappiest participants declined) suggests that the results aren’t merely evidence of people in a good mood giving rosier ratings of their health than people in a bad mood.

A 2005 study suggests that positive emotion also mitigates pain in the context of disease. Women with arthritis and chronic pain rated themselves weekly on positive emotions like interest, enthusiasm, and inspiration for about three months. Over the course of the study, those with higher ratings overall were less likely to experience increases in pain. 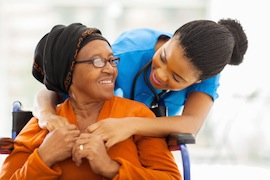 Happiness is associated with improvements in more severe, long-term conditions as well, not just shorter-term aches and pains.

In a 2008 study of nearly 10,000 Australians, participants who reported being happy and satisfied with life most or all of the time were about 1.5 times less likely to have long-term health conditions (like chronic pain and serious vision problems) two years later. Another study in the same year found that women with breast cancer recalled being less happy and optimistic before their diagnosis than women without breast cancer, suggesting that happiness and optimism may be protective against the disease.

As adults become elderly, another condition that often afflicts them is frailty, which is characterized by impaired strength, endurance, and balance and puts them at risk of disability and death. In a 2004 study, over 1,550 Mexican Americans ages 65 and older rated how much self-esteem, hope, happiness, and enjoyment they felt over the past week. After seven years, the participants with more positive emotion ratings were less likely to be frail. Some of the same researchers also found that happier elderly people (by the same measure of positive emotion) were less likely to have a stroke in the subsequent six years; this was particularly true for men. 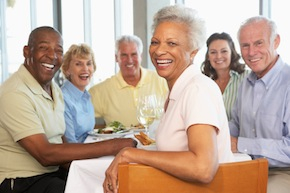 In the end, the ultimate health indicator might be longevity—and here, especially, happiness comes into play. In perhaps the most famous study of happiness and longevity, the life expectancy of Catholic nuns was linked to the amount of positive emotion they expressed in an autobiographical essay they wrote upon entering their convent decades earlier, typically in their 20s. Researchers combed through these writing samples for expressions of feelings like amusement, contentment, gratitude, and love. In the end, the happiest-seeming nuns lived a whopping 7-10 years longer than the least happy.

You don’t have to be a nun to experience the life-extending benefits of happiness, though. In a 2011 study, almost 4,000 English adults ages 52-79 reported how happy, excited, and content they were multiple times in a single day. Here, happier people were 35 percent less likely to die over the course of about five years than their unhappier counterparts.

These two studies both measured specific positive emotions, but overall satisfaction with one’s life—another major indicator of happiness—is also linked to longevity. A 2010 study followed almost 7,000 people from California’s Alameda County for nearly three decades, finding that the people who were more satisfied with life at the beginning were less likely to die during the course of the study.

While happiness can lengthen our lives, it can’t perform miracles. There’s some evidence that the link between happiness and longevity doesn’t extend to the ill—or at least not to the very ill.

A 2005 meta-analysis, aggregating the results of other studies on health and happiness, speculates that experiencing positive emotion is helpful in diseases with a long timeline but could actually be harmful in late-stage disease. The authors cite studies showing that positive emotion lowers the risk of death in people with diabetes and AIDS, but actually increases the risk in people with metastatic breast cancer, early-stage melanoma, and end-stage kidney disease. That increased risk might be due to the fact that happier people underreport their symptoms and don’t get the right treatment, or take worse care of themselves because they are overly optimistic.

All that said, the study of the health benefits of happiness is still young. It will take time to figure out the exact mechanisms by which happiness influences health, and how factors like social relationships and exercise fit in. But in the meantime, it seems safe to imagine that a happier you will be healthier, too.