This video—and the written conversation below, which is different than the conversation caught on video—continues Kelly and my discussion about fostering growth mindsets in kids, specifically HOW TO PRAISE our kids so that they stay engaged and successful in their activities. (If you are reading this post in an email, click here to view the video.) Enjoy!

Kelly Corrigan: Now that I am seeing everything though this fixed mindset/growth mindset prism, I feel a little tongue-tied around my kids. I’ve been in a terrible habit of saying things like “You’re such a good artist” and “You have a beautiful singing voice.”

Christine Carter, Ph.D.: I do it, too. I am training myself to keep pointing out that practice pays off.

KC: It’s Interpersonal Communications 101—always separate the action from the actor. “You are being mean” rather than “You are mean.” We have to stop generalizing and talk instead about specific actions.

CC: “You connected with the ball much better this time” carries a completely different message than “You are a fantastic baseball player.”

KC: The trick is when I’m trying to build up my kids’ confidence. For instance, when I see Claire struggle or hesitate, I want to say, “You can do this, honey. You’re a smart girl.”

CC: That’s a mixed message. The fixed-mindset part—telling her she’s smart—is tempting but that’s exactly the kind of praise is that causes problems. (By the way, I’m constantly having to stop myself from saying to my kids “You’re brilliant!”) We need make the message constructive by saying something like “I know you can do it if you put your mind to it.”

KC: Praise is a powerful drug for a kid. Once they’ve tasted it, they’ll do anything to get it again.

CC: Kids feel people evaluating and judging them. And certain praise reinforces feelings of being valued for their achievements alone. Carol Dweck says, based on her studies of thousands of kids, “Maybe the ability they proved yesterday is not up to today’s task. Maybe they were smart enough for algebra but not calculus. So they’re racing to prove themselves over and over…amassing countless affirmations, but not necessarily ending up where they want to be.”

KC: That is heartbreaking.

CC: Dweck’s team did an experiment where they give kids a short test and then one line of praise. They either said: “You did really well; you must be very smart,” (fixed mindset) OR they said, “You did really well; you must have worked really hard” (growth mindset). After the first puzzle, the researchers offered the kids either a harder puzzle that they could learn from or one that was easier than the one they completed successfully. The majority of the kids praised for their intelligence wanted the easier puzzle—they weren’t going to risk making a mistake and loosing their status as “smart.” On the other hand, more than 90% of growth-mindset encouraged kids chose a harder puzzle. Why? Dweck explains: “when we praise children for the effort and hard work that leads to achievement, they want to keep engaging in that process. They are not diverted from the task of learning by a concern with how smart they might—or might not—look.”

KC: It makes sense to me. Attributing success to innate gifts is a recipe for anxiety and joyless achievement.

CC: Joyless is the key word. In Dweck’s study, during the first puzzle, pretty much everyone had fun. But when the ability-praised kids were given a harder puzzle, they said it wasn’t fun anymore. Because it’s no fun when your special talent is in jeopardy. Effort-praised kids continued to have fun even when they weren’t doing as well. In another study, praising kids’ “smarts"actually lowered their IQ scores! Besides making them insecure and crushing the fun of learning something new, telling kids that how smart they are actually hinders performance.

KC: So we can praise our kids all day long, as long we focus on effort, commitment, resourcefulness, and tenacity.

CC: Right. Because those are the things that truly help them grow and succeed. 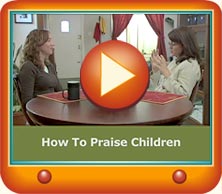