This video—and the written conversation below, which is different than the conversation caught on video—continues Kelly and my discussion about how kids with “growth mindsets” are more likely embrace challenges and enjoy their acitvities. (If you are reading this post in an email, click here to view the video.) Enjoy!

Kelly Corrigan: To kick off this series, give me something really high impact. If I’m only gonna get one thing really right this year, what should that one thing be?

Christine Carter, Ph.D.:ONE thing? If only. But I do think there is a major message to send your kids over and over again this year.

KC: Got my pen ready.

CC: Write GROWTH MINDSET. I’ve just reviewed Stanford psychologist Carol Dweck’s research on the psychology of success, and fostering a growth mindset is hugely important. Her research shows that your mindset about how people learn can profoundly influence how kids feel about school, and also how successful they are academically, athletically—even socially and artistically.

KC: My mindset, or my kids’ mindset?

CC: Your kids,’ which comes from yours. There are two basic mindsets. People with fixed-mindsets believe that their talents personalities are inborn, carved in stone. People with growth-mindset believe that that success is a result of effort as much as or more than aptitude.

KC: Like nature or nurture, right? I gotta say, when I became a parent, especially the second time, I became a believer in nature. Math comes easily to Georgia, Claire is good with language, my husband is naturally musical.

CC:That’s all fixed mindset thinking, which seems harmless enough but is actually sending a powerful message about learning and especially about effort. Nearly three decades of research has shown profound consequences when kids believe that their intelligence (or athletic ability or, for that matter, anything else) is innate rather than believing that talents are something they can develop.

KC: Oh brother, I’m in trouble. I’m always commenting on their “natural” talents… saying things like “You’re so creative…you can really sing…you’re a whiz at math.” And on the flip side, when I see them get frustrated, I often try to take the pressure off them by saying, “You’re not going to be good at everything. Some people just aren’t built for soccer….”

CC: Well here’s the rub: fixed-mindset thinking undervalues the role of effort and learning. To fixed-mindset kids, effort is an indication that they aren’t naturally gifted. If a kid that’s been told he’s “so smart” can’t figure something out easily, does that mean everyone was wrong? If you tell your kids that their talents are inborn, research has shown that this creates urgency in them to prove their “gifts” over and over. That means they start to choose activities based on whether or not they will succeed or fail, look smart or dumb, be accepted or rejected.

KC: I see this sometimes. My daughter draws this incredible, detailed, elaborate flower. When a new babysitter comes over, she draws her flower, the sitter comments on how talented Georgia is, and I see my daughter beam. But I know if the sitter asked her to draw a tree or an apple, she wouldn’t even try because she doesn’t want to look bad.

CC: I was very much a fixed-mindset-student in grade school, and I gotta tell you, it is very uncomfortable to go through life worrying about whether or not people think you’re good at whatever it is you’re trying to be good at. I want my kids to evaluate situations differently than I did—in terms of whether they are going to have fun, learn something, become a better person. Not whether they are going to win, succeed, be the best.

KC: So how do we create the growth-mindset in our kids? How do we help them enjoy things they have not mastered?

CC: The good news is that researchers create growth-mindsets in people pretty easily. Simply send the message that effort is the name of the game rather than achievement. Define their success as how hard they try rather than what kind of grades they get or whether they win the game. That’s the growth-mindset.

KC: Interestingly, this is why I like choir. No points and no individual contributors. Just a big mass of sound that gets better, as a whole, with each rehearsal. But effort in most other realms does not count more than achievement. And trying to sell that is downright counter-culture. Every football game we watch on TV has a scoreboard in the corner. Every movie has a star.

CC: No kidding – and think about the mindset that the Princess craze is modeling. Princesses are born princesses; they wait to be saved. Cinderella isn’t exactly a model of gumption.

KC: Hey, at least she got out of bed. Snow White and Sleeping Beauty just lay there snoring until prince charming turns up. Definitely not growth-oriented. And people love the narrative about the athlete who rolls out of bed and hits a 300-yard drive or the CEO who keeps coming up with the next big thing in his sleep.

CC: We need to counter those messages, pointing out that Tiger Woods has been practicing golf every day since he was three, and Albert Einstein was a mediocre student who found his passion and stuck to it. And the girl in Spanish class who is doing so well? She asks tons of questions, practices every chance she gets, and spends a lot of time doing homework.

CC: That’s it. You now have your high impact message. As Coach John Wooden, who led the UCLA basketball to the NCAA Championship 10 times once said: “You have to apply yourself each day to becoming a little better. By applying yourself to the task of becoming a little better each and every day over a period of time, you will become a lot better.” To create growth-mindset kids, we need to repeatedly communicate: “I expect effort; I do NOT expect achievement.”

KC: I’m there. But I gotta say, valuing effort over achievement is easier for the parent of an elementary school kid than a high school sophomore, whose grades or athletic performance might matter more.

CC: That’s an inner battle we’ll take on next week!

—-
This is the first video in the series.The second is Achievement Doesn’t Matter. The third teaches more about the right way to praise kids.  The fourth video in this series is Let Your Kids Fail.
—- 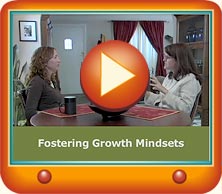