Every mother I know understands all-too-well the ways her body and brain change after she has a baby.  Of course, it’s virtually impossible not to notice changes in, say, the form and function of your breasts after junior is born.

But did you know fatherhood changes men biologically, too, and in a good way? 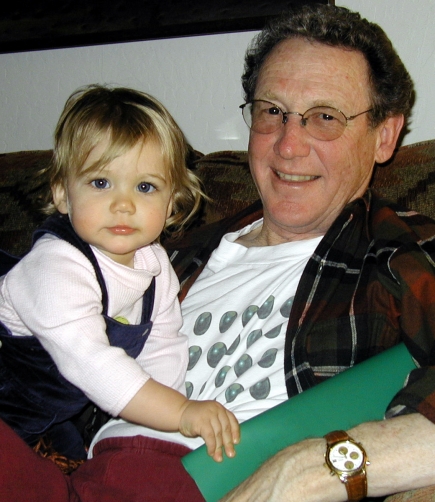 My dad with my daughter when she was a baby. © Christine Carter

It’s true: Research shows that after the birth of their children, men go through a lot of the same physiological changes that women experience during pregnancy. Some of this research has been on mice and monkeys, but these changes have been documented in humans as well. Care-giving fathers see “cognitive enhancement”—growth in their brain structures—that makes them better planners and decision makers, better at forging for food (that’s the mice), and better at processing emotions.

Here’s another surprise, at least to those of us who assume mothers are more connected to their children: Dads are equally good at interpreting their infants’ needs, such as knowing if cries indicate their babes are hungry or tired.  And they are as good as mothers at picking their infants out of a group when blindfolded, just by feeling babies’ hands.

But fathers, at least in the U.S., parent differently than mothers, and kids seem to benefit from these gender differences.  For example, fathers spend more time playing with children than mothers do.  This is probably in large part due to the current social division of labor; mothers spend more time taking care of the basic needs of children, and therefore have less time to play.  Although division of labor may have a detrimental effect on the well-being of mothers, all that playing has positive benefits for kids, encouraging them to take challenges and physical risks that boost their development.

Although not all children (and mothers) have an involved father around, it is clear that kids “who have stable and involved dads are better off on nearly every cognitive, social, and emotional measure researches can devise.  For instance, high levels of father involvement are associated with children who are more sociable, confident, and self-controlled and less likely to act out in school or engage in risky behaviors” as teenagers, writes journalist Emily Anthes in a review of the scientific literature on the subject.

For example, a new study shows that teens actually behave better—they act out less—when they feel connected to fathers who are involved in their lives.  While father involvement and connection is most strongly linked to decreases in kids’ negative behaviors, mothering is more related to how optimistic and hopeful children are about the future.

What influences whether or not a father will be involved?  Personal values, certainly, but also social factors external to the father himself.  For example, workplace policies about paternity leave and work hours can markedly increase fathers’ involvement with their young children.  Fathers who spend more time caring for newborns, for instance, tend to remain active participants in their children’s care throughout childhood.  And it is workplace policy that in large part influences how much time he spends caring for a new baby.

Mothers are also, of course, extremely influential in this arena.  When we mothers roll our eyes at how out-of-touch a dad is, we increase the odds that he will distance himself from his children.  But when we encourage fathers by telling them how our children are thriving in their care, or by asking them for their opinion on things, men tend to up their involvement with kids.

It is worth reporting that mothers who don’t let dads get as involved in caregiving tend to have lower self-esteem than mothers who give dads more control.  This is another reason why we are better parents when we take care of ourselves first; trouble with our own self-esteem can reduce father involvement, and father involvement is good for kids’ happiness.  Incidentally, dads also need to take care of their own happiness first: Depressed dads are less involved with their toddlers, and this affects their children’s development.

Turns out that changes in our expectations about how involved fathers will be bring good news all around.  Involved fathers make for happier kids, happier marriages, happier mothers, and healthier dads: New research shows that men in traditional breadwinner/homemaker households tend to be less healthy than those in families where men do more caregiving and women bring home more bacon.

So this Father’s Day, consider fathering itself a gift to dad—maybe one that could have a more positive affect on everyone than that new golf club or fishing pole.

Day, Randal and Laura Padilla-Walker (2009). “Mother and Father Connectedness and Involvement During Early Adolescence,” Journal of Family Psychology, Vol. 23, No. 6, 900-904.