Two sixth grade girls in my daughter’s class recently got into a snit in the locker room after PE. Apparently, one girl (let’s call her Janet) was wearing boy-shorts with “love” emblazoned across the bottom. She claimed these ultra-cool undies came from Victoria’s Secret. The other girl said she’d gotten the very same underwear from Target.

They were fighting about status: Did Janet have bragging rights? Or was she upgrading her Target underwear to Victoria’s Secret sexiness “to get attention,” as my daughter thinks?

These girls are 12 years old. Why are they arguing about this? 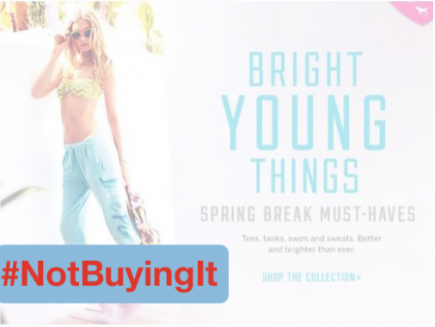 I am in the thick of raising adolescent girls. In addition to my own two daughters, there are a dozen other girls—the daughters of close friends—whose backs I’m trying to protect. Because I love these girls and see how vulnerable they are, the locker-room argument about Victoria’s Secret underwear makes my blood boil.

You may have heard that Victoria’s Secret blatantly targeted teens and tweeners at their fashion show a few months ago, complete with an appearance by Justin Bieber. Now they’ve gone one step further with the launch of its “Bright Young Things” campaign to appeal to young teens. “When somebody’s 15 or 16 years old, what do they want to be?” company CFO Stuart Burgdoerfer quipped at a news conference. “They want to be older, and they want to be cool like the girl in college, and that’s part of the magic of what we do.”

Advertising and marketing does work like magic. That is what is so scary. An advertising campaign like this one affects young girls in deep and often harmful ways—and new scientific research suggests just how deep and harmful these effects may be. Drawing on this research, I’ve identified three of the more pernicious messages Victoria’s Secret is sending our daughters.

(2) Your body is not good enough. When they put supermodels in high heels, little-girl costumes, and bubble-gum underwear on stage with Justin Bieber, they create an impossible ideal for our girls to emulate, which in turn makes them feel inadequate. Consider these statistics from the University of Washington’s Teen Health and the Media website:

As our daughters go through puberty—a time of intense body changes—they start to care much more about their bodies. These biological and developmental changes are amplified by advertising. They don’t call it neuromarketing for nothing: When advertising sends our girls messages about what their changing bodies should look like—and it’s not what they do look like—the ad causes a dopamine rush in our daughters’ brains that, in turn, creates intense desire for what is being advertised.

I don’t know about you, but I don’t want my daughters to think of their ideal selves as uber-sexy barbie-dolls with “call me” on their panties, and I don’t want them to feel inadequate compared to this brightly-colored exemplar.

(3) Girls are objects—for boys. When I saw that fashion show I couldn’t help but think of the Steubenville gang rape, in which a teen girl was used as a sex toy and dragged, unconscious, from party to party. Where do boys learn that girls are objects, accessories for their entertainment? Look no further than the media, where objectified women are the norm rather than the exception.

I want my girls to have boyfriends who see them for the whole people that they are, boys who treat them as individuals, not objects or a bunch of sexualized body parts. I want my girls to have meaningful intimate relationships. When they are ready to be sexually active, I want them to feel loved and cherished by their sexual partners and empowered by their sexuality—not used and discarded like last year’s Christmas present.

I know that Victoria’s Secret is not our only, or even our biggest, problem when it comes to protecting our girls from eating disorders, rape, and devastatingly low self-esteem. Dozens of other companies taunt our youth with hyper-sexualized images, of course; the tween market is worth “$335 billion of spending power,” retail analyst Hitha Prabhaker told the TODAY show Tuesday morning.

Large consumer products companies, with their gazillion-dollar marketing budgets, are influencing our kids in profound ways. As parents, we can protect them by not letting them watch commercials and by not letting them shop in (or, frankly, even near) stores like Victoria’s Secret. We can—and should—write letters and hope that our righteous anger goes viral on Facebook.

But honestly, these tactics feel profoundly inadequate compared to the marketing machines that we face. Can we win a war by boycotting the companies that hurt kids, or by simply hiding our children from the enemy?

I hope so. But I welcome other ideas if you’ve got them—please post below. In order to stand up to Victoria’s Secret and other retailers preying on our children, I think we parents are going to have to be committed, creative, and well-organized. I hope comments on this post, and this blog as a whole, can help support that movement.