Emarco Washington was one of the ﬁrst teens in California to be tried as an adult for a vio­lent crime. His rap sheet is long: assault and bat­tery with robbery, hate crime against a gay man, assault with a deadly weapon, assault on police.

By the time he was pushing 30, Washington had served time at San Quentin State Prison or city jails almost every year since he was a teenager. 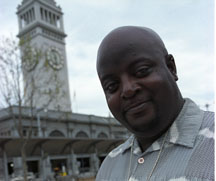 "I learned the injustice caused by violence is tremendous," said Emarco Washington (pictured). "It was, 'Wow! I hurt all these people. I was blinded by my own stupidity.'" © Timothy Wheeler

“All my life, I’ve been in and out of trouble, but I was convinced I wasn’t violent,” he said. “I thought I was tough, not violent. I lied to myself for so long I should have been dead.”

Then in 1997, as part of his sentence for possessing stolen property, the San Francisco County Sheriff’s Department ordered Wash­ington into a jail program called RSVP: Resolve to Stop the Violence Project. In his ﬁrst week there he met a former skinhead, Aaron Mosco­vitz, who had already undergone a dramatic transformation through the program. Moscovitz went from perpetrating violent hate crimes to becoming a public speaker against violence. If the program could take violent racists like Moscovitz and return them to society reformed and peaceful, Washington was curi­ous about what the program could do for him.

Like most of the 2,000 men admitted to RSVP since it began in 1997, Sheriff’s Depart­ment administrators placed Washington in the program’s 62-bed jail dorm in San Fran­cisco County’s San Bruno jail for a strict regimen of violence reduction training, 14 hours a day, six days a week. Some men take 12 to 16 weeks before they’re deemed ready for release. Washington signed on for 52. 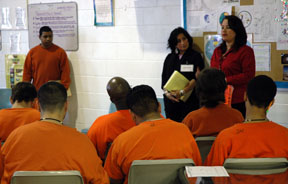 Offenders can volunteer to enter the pro­gram but are usually selected by administra­tors as likely candidates for turning their lives around, said George Jurand, RSVP manager.

The program, offered only at San Bruno, involves an innovative mix of individual and group therapy, relaxation techniques such as yoga and acupuncture, and “victim empathy” or “victim impact” sessions, where inmates meet crime victims who describe their suffer­ing, such as a grandmother whose daughter and infant grandson were stabbed to death.

RSVP was created as a model of restorative justice, a philosophy that advocates rehabilitat­ing offenders and having them make amends with their victims rather than simply punishing them. Restorative justice aims to make offend­ers acknowledge their violent behavior and the harm it’s caused, recognize violence and learn how to avoid it, and make a commitment to repair some of the damage they’ve caused.

“The victim impact sessions are one of the most powerful parts of the program,” Jurand said. “It’s very emotional. For many men, it’s the ﬁrst time they get the connection between their crime and the victim. It’s very personal.”

Critical to the program is helping men understand why they’ve resorted to violence in the past. Some learned violence in their youth as a way of preserving their self-esteem—to the point that they’ll kill or die to avoid “los­ing face” in a confrontation, Jurand said.

“One of the best things I learned was what violence was, the different types of violence, like mental and emotional vio­lence,” said Washington. “I learned the injustice caused by violence is tremen­dous. It was, ‘Wow! I hurt all these people. I was blinded by my own stupidity.’”

After reaching a better understanding of the roots of his own violent behavior, Wash­ington reconciled with his mother when he left jail. He had long been verbally and emotionally abusive with her, especially when she wouldn’t give him money for drugs.

“I was addicted to crack, marijuana, alcohol—anything to get high,” he said. “I phoned her after [RSVP] and told her I had been angry when she wouldn’t send me any money before. ... I told her the last thing I wanted to do was to hurt her, and it was like a rain washing over me. That told me if I changed my behavior, my language, I could prove to myself and to others that I wasn’t a bad seed.”

Washington’s transformation embodies the highest goals of the RSVP program: violence prevention, victims receiving restitution for their suffering, and offend­ers taking responsibility for their crimes. For years, men in San Francisco jails were rarely a part of anything so constructive. They were far more likely to be caught in destructive cycles of violence, according to RSVP founder Sunny Schwartz, an attorney in the San Francisco Sheriff’s Department.

“We were seeing the same repeat offend­ers coming back with the same very sorry excuses,” she said. “I was seeing the third generation of incarcerated people—the grandchildren of people I saw before.”
Rather than addressing the problem, the jail system was making it worse, she said.

“Jails are really unhealthy places for any human being to reside,” said Schwartz. “Spend 18 months in San Quentin, and you come out after being surrounded by the underbelly of human­ity all that time. We’re all products of our environment. After that, we can’t be surprised if a man acts like an animal.”

Schwartz said San Francisco’s progres­sive sheriff, Michael Hennessey, agreed that the jail system wasn’t helping offend­ers but was teaching them to be bet­ter criminals. It was doing very little to prepare them for re-entering society.

A 1990 internal study of 2,200 offenders in six San Francisco jails and post-release community treatment centers showed that at least 80 percent of offenders were sub­stance abusers. Their reading and compre­hension tests showed an average reading level of Grade 5 to 7. Eighty percent of them were victims of violence, perpetrators of violence, or both. With those demo­graphics, they seemed ill prepared to suc­ceed in the real world and stay out of jail.

“We knew we needed to create pro­grams that would release prisoners more responsibly,” said Schwartz. “We needed to put dignity back into the treat­ment of offenders and their families.”

Schwartz credits Hennessey with the bold decision to build a program aimed at helping both offenders and victims escape the hold of violence.

“It was biblical,” she said. “It was what a lot of us were hungering for. We had to engage everyone hurt by crime, make offenders accountable, work on victim restoration, and get the community involved in an effort to heal the harm caused by crime.”

Schwartz designed RSVP with key members of the San Francisco community to reinforce a message that reducing vio­lence and showing restitution to victims is a community service. Devising the program took more than a year of weekly meetings with an eclectic team that included Baptist ministers and Orthodox rabbis, Republi­cans and Democrats, victims and ex-cons, police ofﬁcers and former gang members, homemakers, doctors, and others. Meetings always began with a moment of silence for victims of violence, Schwartz said.

While Hennessey was equally enthu­siastic about restorative justice, he wasn’t thrilled about an experiment that put 60 violent men in one dorm together. He often says the department feared a riot or worse when RSVP was launched.

“In the ﬁrst year, we had no ﬁghts inside—we usually get three a week in our jails,” Schwartz said. The RSVP jail “became the safest dorm to work in.”

The program’s success swiftly proved Schwartz’s belief that “violence is learned. It can be unlearned.”

A ﬁve-year study of RSVP showed a reduction as high as 80 percent in the number of graduates arrested on violent charges after their release, according to the study’s author, James Gilligan, founder of the Center for the Study of Violence at Harvard Medical School. A former prison psychiatrist, Gilligan is the author of the recent book, Prevent­ing Violence: Prospects for Tomorrow.

Gilligan’s RSVP study also showed that the longer an offender was involved in the program, the greater his chance of not committing another violent crime. A two-month pro­gram saw a 42 percent reduction in re-arrest for violence; a three-month stint had a 50 percent reduction.

All of these numbers are promising, but Sunny Schwartz is not satisﬁed. “I’m deeply appreciative of the path we have broken,” she said. “But we should not be complacent. Inside, this is a dress rehearsal. We need to escalate our effectiveness at the [release] gate.”

RSVP has won numerous awards and has been featured on national television shows, including The Oprah Winfrey Show and Larry King Live, and Schwartz has given public lectures internationally and across the United States. One of the program’s greatest signs of success is the RSVP internship, which trains former offenders to work as anti-violence instructors with the same men who used to be their jail mates.

Emarco Washington interned for a year as an anti-violence trainer at the San Bruno jail, where he once wore the orange jumpsuit of an offender. Afterwards, he left the jail system for a job at a San Francisco non-proﬁt agency that works with families going through divorce. Agency staff spot­ted him while he was working at RSVP and hired him last year.

“RSVP has a great impact,” said Washington. “Some of the guys who were in the program when I was there still come up to me on the street and say, ‘Thank you.’ They show you a lot of respect. They tell you that you changed their lives. That’s very powerful.”