As images of the Northern California wildfires confirm, living on the edge of a forest comes with considerable dangers. But new research from Germany suggests that proximity to a wooded landscape may also have a huge benefit.

A study of older urban dwellers found that living in close proximity to forest land is linked with strong, healthy functioning of a key part of the brain. This indicates that, compared with those who live in a mostly man-made environment, people who dwell on the border between city and forest may be better able to cope with stress. 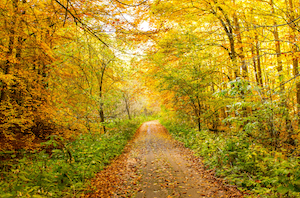 The findings suggest “forests in and around cities are a valuable resource that should be promoted,” writes a research team led by Simone Kuehn of the Max Planck Institute for Human Development in Berlin. Its research is published in the journal Scientific Reports.

The researchers analyzed data on 341 participants in the Berlin Aging Study II, all of whom lived in the city and were between the ages of 61 and 82. They specifically looked at “three different indicators of brain structural integrity,” each of which provided “distinct information” on several key brain regions.

They also noted the amount of forest land within a one-kilometer radius of each participant’s home address. (Many lived on the outskirts of the city, close to wooded areas.)

“Our results reveal a significant positive association between the coverage of forest and amygdala integrity,” the researchers report. The amygdala is the almond-shaped set of neurons that plays a key role in the processing of emotions, including fear and anxiety.

Perhaps surprisingly, Kuehn and her colleagues found no such association from living near bodies of water, or close to urban green spaces such as parks. Only proximity to forest land had this apparent positive effect.

The researchers caution that these results do not prove causality; it is possible that, for whatever reason, people with healthier amygdalae choose to live near forests. But that seems improbable, to put it mildly.

The study complements the already-strong psychological evidence of the benefits of living close to nature. Previous research has linked access to green space to longer lives, lower levels of aggression, and kids’ cognitive development. One study suggests it even makes for nicer people.

In addition, another newly published study suggests future space voyages should include plant life. It finds that, for astronauts, interacting with greenery can help reduce both social and cognitive problems associated with space travel.

More research will be needed to confirm that forest land has a stronger, measurable impact on brain health than exposure to other forms of nature. But the evidence keeps mounting that, in stressful times, there is much to gain by surrounding yourself with plants and trees.

This story originally appeared as “Living Near a Forest Is Linked to Better Brain Health” on Pacific Standard, an editorial partner site. Subscribe to the magazine in print and follow Pacific Standard on Twitter to support journalism in the public interest.