When I was young, I didn’t get along well with my older sister. Though I looked up to her and longed for her positive attention, she didn’t seem to want me around, especially when her friends came over. 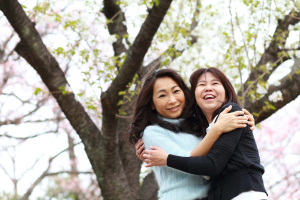 That’s weird to recall, as we are currently very close—a blessing, especially now that our parents are long gone. Our relationship has evolved over my lifetime into something very different than how it began, exerting a profound influence on both of us.

Is that unusual? Though parent/child relationships have received the lion’s share of attention in psychology research, researchers are starting to discover the many ways siblings affect us, too—for good and for bad. By paying attention to the quality of our sibling relationships, we might make our own discoveries about ourselves and our families.

Experts say that around 80% of Americans have at least one sibling. For many, those are the longest-lasting relationships in their lives, extending well beyond the parent/child relationship.

“Parents don’t stay with you your whole life, your romantic partners come and go (and you don’t meet them until later in life), friends come and go, but siblings are always there through the lifespan,” says researcher Susan McHale of Penn State University, who studies sibling relationships.

Because of that long connection, she adds, siblings matter a lot for our personal growth and well-being.

Research confirms that if siblings have hostile or conflicted relationships when young, it can increase their risks of suffering anxiety, depressive symptoms, and even risky or antisocial behavior later in adolescence. On the other hand, positive sibling relationships can be protective, with warm relationships tied to better social relationships during the teen years.

For Laurie Kramer of Northeastern University, the reason brothers and sisters matter so much is that those relationships are practice grounds for other relationships in life.

“We learn a lot by interacting with people who we spend a lot of time with, like how to share, care for another person, be considerate of another person’s needs,” she says. “But we also learn how to manage conflict and other social-emotional skills, which we can apply to other relationships.”

Whether our siblings are warm and kind or more combative and bullying, siblings are watching each other carefully, she adds, absorbing information “like sponges” on how to navigate the world.

“They’re picking up on all of this and creating their own identities, many times in response to how they perceive their siblings—or, if they don’t want to be the same, in reaction to that,” she says.

What strains the relationship?

The effects of sibling relationships depend on many factors. For example, when parents show preferential treatment for one sibling over another, or if children feel their parents are not treating them fairly, that generally increases sibling conflict and creates problems down the road.

“When children perceive that parents are being unjust, that’s when we see all the significant correlations with poor outcomes for children, like poor sibling relationships, poor parent/child relationships, and poor appraisals of their own self-worth,” says Kramer.

On the other hand, siblings can understand differential treatment, if there’s a good explanation for it—like a sibling has special needs or an older child has later curfews. Even when favoritism is toxic, says McHale, siblings can heal their relationship by acknowledging that it’s happening and how unfair it is.

“They can be protective of one another, provided that they both understand what’s going on, it’s recognized, and the favored child can be supportive of the less favored child to help make up for parents’ behavior,” she says.

Marital conflict in a family, too, can create less warmth and more conflict between siblings. That may have played a role in my relationship with my own sister, as my father’s alcoholism was a source of tension in my parents’ relationship.

McHale says that gender can play a role; generally, sister/sister pairs or sister/brother pairs tend to be closer. That may be because girls and women are socialized to be more emotionally expressive, which is tied to less conflict. In adolescence, having a sibling of the opposite sex can be an advantage, if you’re heterosexual.

“We’ve found that kids with other-sex siblings are more romantically competent,” says McHale. “Unfortunately, we don’t have enough transgender or non-binary kids in our studies to be able to know how these things work in a broader gender context.”

“It really does come down to a set of social and emotional competencies,” she says. “Even young kids can learn a lot of these skills and apply them in their relationship with their siblings later on.”

How sibling relationships can shift as we age

It was hard for me to have conflicts with my sister when we were young. But, fortunately, our relationship improved once we both moved out of our parent’s house and had independent lives—a common occurrence, according to research. As conflicted siblings enter young adulthood, their relationships often become less intense but warmer than when they were younger.

As adults age even more, sibling relationships tend to become even less fraught, with midlife and older adults rating their sibling relationships as warmer, less conflicted, and less marred by parental favoritism than younger adults. Later in life, sister-sister siblings seem to have the closest relationships, spend the most time together, and support each other the most when compared to other sibling pairs.

But do these relationships matter much in later life? McHale suggests they do.

“Given your shared history, siblings understand you like no one else really can,” she says. “Family routines, family rituals, memories of your family, the ways things work in your family, the little jokes and private understandings—you just don’t have that with other people, not even a long-term spouse.”

Still, conflicts can arise between siblings in adulthood, says Kramer, especially as life gets complicated by work obligations, raising families, parent caregiving, or a parent’s death. If old familial wounds (like perceived favoritism) get revisited, it can lead to poorer relationships and increased depression.

Yet warmer sibling relationships in older adults do seem to help stave off loneliness and depression, and siblings often help each other out when times are tough. This suggests they remain important and are worth nurturing.

How to improve sibling relationships at any age

It’s probably best to encourage warm sibling relationships from the get-go. But some parents may resist, thinking it’s normal for siblings to have conflicts and they will just work it out on their own. McHale disagrees with that approach.

“You hear that a lot—that it’s natural for siblings to fight. But it’s not natural,” she says. “In certain cultures, siblings have prescribed roles, where the elder brother or eldest sister is the caregiver, and fighting is not common, expected, or tolerated,” she says.

Kramer also thinks this attitude is a mistake and sets up siblings for failed relationships.
“We don’t expect everything to be positive for sure, but neither should parents expect siblings to fight a lot,” she says. “That’s not really preparing kids to start a relationship with someone who’s going to be really important in their life.”

She and Kramer both believe that helping siblings to understand and manage their emotions, learn perspective taking, and find better ways to play together are key for developing positive sibling relationships. To that end, Kramer has developed an online program called More Fun with Sisters and Brothers, which helps parents coach their four- to eight-year-old children how to get along and get through conflicts without hurt feelings.

McHale also has a program for kids and their parents, Siblings Are Special, which does much the same thing. In randomized trials, including one with Latino families, she and her colleagues showed that the program led to significant improvement in relationships—as well as decreasing parental depression.

This is great news for parents. But what about adult siblings who find themselves at odds? It can be tough if there are unresolved conflicts from childhood, says Kramer, though acknowledging that can go a long way toward healing. Adult siblings will also need to practice many of the same skills that younger kids need to get along.

“Understanding why you’re upset, expressing emotion, understanding another person’s perspective, trying to come up with a compromise or a way to solve problems—these are just core social skills,” says McHale. “They are useful in fostering better relationships at any point in life.”

Are those efforts worth it? Kramer says yes. “I truly believe that we can work to improve relationships like these at any point because of siblings’ underlying connection. Siblings may not spend a lot of time together or may have disagreements. They don’t have to be best friends forever. But it’s good for them to like each other enough to help out in a pinch.”