On a fine summer morning in Vancouver, British Columbia, our graduate student Lara Aknin approached passersby with a box of envelopes and an unusual request: “Are you willing to be in an experiment?” If people said yes, she asked them how happy they were, got their phone number, and handed them one of her mysterious envelopes.

When people opened the envelope, they found a five dollar bill, accompanied by a simple note. For some of them, the note instructed:

Please spend this $5.00 today before 5pm on a gift for yourself or any of your expenses (e.g., rent, bills, or debt).

Others found a note that read:

Please spend this $5.00 today before 5pm on a gift for someone else or a donation to charity.

In addition, some people got similar envelopes, but with a 20 dollar bill rather than a five. Armed with this extra bit of cash and their instructions about how to spend it, people went on their way. That evening, they received a call asking them how happy they were feeling, as well as how they had spent the money. 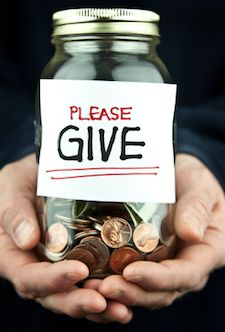 How did their purchases affect them? By the end of the day, individuals who spent money on others—who engaged in what we call “prosocial spending”—were measurably happier than those who spent money on themselves—even though there were no differences between the two groups at the beginning of the day. The amount of money people found in their envelopes—five dollars or 20—had no effect on their happiness. How people spent the money mattered much more than how much of it they got.

This experiment suggests that spending as little as five dollars to help someone else can increase your own happiness. Similarly, in a representative sample of more than 600 Americans, the amount of money individuals devoted to themselves was unrelated to their overall happiness; what did predict happiness was the amount of money they gave away: The more they invested in others, the happier they were. This relationship between prosocial spending and happiness held up even after taking into account individuals’ income.

And it extends well beyond North America: A survey conducted by the Gallup World Poll between 2006 and 2008 found that in 120 out of 136 countries, people who donated to charity in the past month reported greater satisfaction with life. This relationship emerged in poor and rich countries alike—again, it held up even after controlling for individuals’ income. Across the 136 countries studied, donating to charity had a similar relationship to happiness as doubling household income. The link between prosocial spending and happiness seems to be remarkably universal.

But these findings don’t mean that people always experience pure, unmitigated happiness from helping others: Research shows that the nature of the giving situation matters. Investing in others can take a seemingly limitless variety of forms, from donating to a charity that helps strangers in a faraway country to buying lunch for a friend.

When does giving promote the most happiness? Understanding the answer to this complex question can help us get the biggest happiness bang for our own prosocial buck—and can help us create positive giving experiences for our children, clients, customers, employees, and donors. Below, we describe three strategies designed to boost the impact of investing in others.

Most of us have experienced a situation in which we felt cornered into providing help, whether by an overeager street canvasser, a colleague’s child selling overpriced chocolate bars for her basketball team, or a friend’s awkward request for a loan (an event so ubiquitous that Googling “awkward loan requests” gets about 90 million hits). Not surprisingly, feeling cornered can suck the joy out of giving.

Research by Netta Weinstein and Richard Ryan backs this up. In one study, 138 college students kept a daily diary over a two-week period, reporting how they felt each day and whether they had helped someone else or done something for a worthy cause. Students reported feeling better on days when they did something prosocial, but only when their actions felt self-chosen. If students helped because they felt like they had to or because people would be mad otherwise, they felt worse on days when they did good things.

The value of choice can also be seen in brain scans. In a study at the University of Oregon, researchers gave $100 to people, who then donated some of this money to a food bank—all from the inside of a scanner that assessed brain activity as they donated. Sometimes people could choose whether to give money, but sometimes the donations were mandatory, more like taxation. Even when donations were mandatory, giving to this worthwhile charity provoked activation in reward areas of the brain. But activation in these reward areas (along with self-reported satisfaction) was considerably greater when people chose to donate than when their prosocial spending was obligatory.

So what does this mean if you’re a professional fundraiser? Maybe you should just set up a pretty website and then let people decide whether to donate of their own accord. There’s just one problem with this strategy: You’re not likely to collect much money. One of the most common reasons people report donating to charity is that someone asks them to give. The trick, then, is to craft charitable appeals that encourage people to give—without making them feel forced to comply.

Even subtle changes in the nature of a request can make all the difference. In one study, a graduate student requested a bit of help and ended her plea by saying either, “It’s entirely your choice whether to help or not” or “I really think you should help out.” In both cases, the personal plea was highly effective. More than 97 percent of people agreed to help. Importantly, though, helpers felt happier if they had been reminded that helping was their choice rather than being told they should help. What’s more, people reminded of choice provided higher-quality assistance and felt a closer sense of connection with the person they helped.

It may seem obvious that gifts can help strengthen relationships. Indeed, after learning that their girlfriends have selected a desirable gift for them, men in long-term relationships are significantly more likely to say that the relationship will continue—and culminate in marriage.

But not only do gifts make us feel close to others; feeling closer to others makes us feel better about gifts. Research shows that people derive more happiness from spending money on “strong ties” (such as significant others, but also close friends and immediate family members) than on “weak ties” (think a friend of a friend, or a step-uncle). 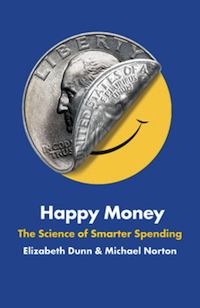 This essay is adapted from the new book Happy Money (Simon & Schuster), by Elizabeth Dunn and Michael Norton.

How you give and experience this connection is important, too. To explore this idea, Lara Aknin, who is now a professor at Simon Fraser University, decided to hand out $10 Starbucks gift cards. She told some people to use the gift card to take another person out for coffee. She told others to give the gift card away to someone else, but she insisted that they refrain from accompanying that person to Starbucks. So, people in both groups got the chance to invest in others, specifically through the gift of caffeination, but only one group was allowed to spend time with the beneficiary of their gift.

Meanwhile, Lara handed out additional gift cards to a different group of lucky people, telling them to spend the gift card on themselves; half of these people went to Starbucks alone, while the others visited Starbucks with a friend but spent the card only on themselves.

Who was happiest by the end of the day? The people who used the gift card to benefit someone else and spent time with that person at Starbucks. Investing and connecting provided the most happiness.

Think of your own pro-social spending budget in terms of levels of connection. You’re likely to get the biggest happiness bang for your prosocial buck if you invest in others in ways that help you connect with people, especially people you care about.

But it’s possible to create a sense of connection even with total strangers.  A particularly strong example of that is the website DonorsChoose.org, which allows donors to purchase supplies or fund projects for a specific group of students. Creating links between a specific donor and a specific classroom enables an emotional connection to emerge from what would otherwise be a cold financial transaction. Teachers send thank-you notes to donors, and students often do so as well. “When we deliver the initial thank-you note to the donor, our first ask is not for money,” says DonorsChoose founder Charles Best. “Instead, we ask the donor to write back to the classroom, and we measure success in the volume of two-way correspondence that we see between donors and classrooms.”

A donation to UNICEF (the United Nations Children’s Fund) helps children around the world. There is no denying the importance of this cause, but it can be hard to see how a small donation to such a large, nebulous organization will make a concrete difference in a child’s life. Contrast that with Spread the Net, which allows donors to contribute $10 to send one malaria net to sub-Saharan Africa. Their slogan? “A child dies needlessly from malaria every minute. One bed net can protect up to five children for five years. 1 net. 10 bucks. Save lives.”

As that finding suggests, people feel better about giving money when they can sense the real-world impact of their generosity. Knowing that we’re having an impact on someone else is another critical factor in transforming good deeds into good feelings.

What’s more, enabling donors to see the specific impact of charitable initiatives carries a huge potential payoff: By maximizing the emotional benefits of giving, the strategy can make people more willing to behave generously in the future.

Evidence for that claim comes from a recent study we co-authored with Lara Aknin. After reflecting on a time when they had spent money on themselves or others, students received an envelope filled with cash. This time, though, they were allowed to choose how to spend their windfall. Not only did people feel happier after reflecting on a time when they spent money on others, but the happier they felt after thinking about their past spending experience, the more inclined they were to spend the new cash-filled envelope on others rather than themselves. Giving and happiness reinforce each other, creating a positive feedback loop.

Is it possible to let people taste the joy of making a positive impact for as little as a dollar? It’s tough to imagine how such a small donation could make a difference—unless you join forces with others. In 2012, Daniel Hawkins formed the Dollar Collective. Members each contribute one dollar, and the group decides what random act of generosity to perform with the pool of money. As their first act, they surprised a young couple out for Valentine’s Day and paid for their entire meal. And the couple who received the unexpected free meal? They decided to give the money they saved on dinner to a local charity (as well as buy some treats for their cat).

Just one example, but it points to a larger scientific truth: When prosocial spending is done right—when it feels like a choice, when it connects us with others, and when it makes a clear impact—even small gifts can have a big effect on happiness, potentially spurring a domino effect of generosity.