A teacher recently told me that after explaining to her middle school students how their test scores impact the school, one student raised his hand and said, “It seems like we exist for the school rather than the school existing for us.”

How many school leaders and teachers would agree with this statement? And how many would love to reverse the situation?

That’s exactly what one principal did. And it transformed the school culture.

Humility and leadership are words not often used in the same sentence. But nascent research is revealing that school leaders who recognize their strengths and limitations, remain open to feedback, ideas, and advice, and express appreciation for the value that others bring to the table—all cornerstones of humility—create a school culture in which teachers are more satisfied with their jobs and also believe in the school leader’s ability to lead. 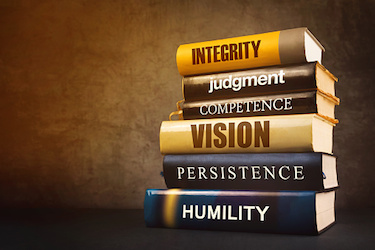 At the beginning of her career as a middle school principal, Amy Johnston wouldn’t have described what she brought to the role as “humility.” Lacking vision and experience and facing a divided staff—half of which had wanted to hire the other candidate and the other half still doubting she was ready—Amy was terrified.

“I went to the staff and said, ‘I absolutely cannot do this without you. I need you,’” describes Amy. But it was in that moment of utter need that set the tone for the rest of her career as the humble leader who would create a school that was dedicated, above all else, to the growth and well-being of both students and staff.

Amy’s “aha moment” about the role of a leader came in her third year as principal when she attended the Leadership Academy for Character Education. “I came from the old school of management where it was my way or the highway,” says Amy. “But the Academy helped me to realize what I was supposed to be doing as a leader and to understand what our real purpose is for educating students: to be authentic and share values and build relationships.”

She went to her staff and told them that she no longer cared about test scores or standards and that instead, their focus was going to be on building relationships with the students.

“I told them that we have to love the kids and not be ashamed of it,” explains Amy. “And that relationships are one of the most important things we do as human beings, but we’re never intentionally taught how to function and be in a relationship.”

As expected, Amy’s plan met with some reluctance. Rather than force her ideas, she validated teachers’ concerns, including their worries about taking time away from the curriculum, and gently suggested that the staff put the students first.

“I asked them, ‘What if we built a school where we ask students what they think and we actually listen to their responses, knowing that we can’t have all the answers as adults?’” says Amy.

So rolling up their sleeves, Amy and the staff did the hard work of organically creating a character program grounded in the 11 Principles of Character Education, which ultimately changed the culture of the school. Thus, the humility in Amy’s leadership slowly extended itself to how her staff ran the school as a whole.

The staff spent their energy on helping students believe they could be successful and then giving them the skills to do so, making them redo work if they didn’t learn it the first time. They wanted the children to love school so that when they transitioned to high school, they knew they would succeed rather than crash and burn out.

The result? Test scores went through the roof, beating every other school in the district, and discipline problems declined dramatically.

At the start-of-the-year district meeting when each principal announced his or her focus for the year, every single one except Amy said, “improve test scores.” Instead, Amy told everyone, “We’re going to just continue our character education journey.”

“There was an audible gasp in the room,” she remembers. “People said, ‘I can’t believe you just told the superintendent that.’ But that’s what we’re going to do. Granted, our scores were so good that the superintendent left me alone.”

In the end, Amy attributes much of her success to her willingness to be vulnerable with her staff—a hallmark of humble leadership.

“I tell school leaders to just let go of the idea that you have all the answers. It’s so freeing to go there,” she says. “If they can put aside all the ridiculous expectations imposed on them by the government and focus on building the culture, then everything that’s expected of them will happen. You just can’t push people to those insane extremes if they don’t trust you.”

Given the tremendous responsibilities and expectations placed on school leaders’ shoulders along with the need to appear “in control,” cultivating humility may not be high on their to-do list. Yet, as any leader worth his or her salt could tell you, leadership is not just about the outer journey, but about the inner one as well.

1. Ask yourself: Is it all about the students or all about the school? Humility is a core component of servant leadership—a type of leadership whose hallmark is the growth and development of followers rather than organizational success, and, hence, a perfect model for schools that are in the business of growing human beings.

Business leader Robert Greenleaf, who coined the term in the 70s, famously wrote, “The best test, and difficult to administer, is this: Do those served grow as persons? Do they, while being served, become healthier, wiser, freer, more autonomous, and more likely themselves to become servants?”

The ability to put the growth of others first comes from a belief in the intrinsic value of every human being—key to both humility and servant leadership—which fosters tremendous inner strength.

For Amy and her staff, decisions were made based on what was best for the students, not for the school. “We decided that if students failed at any point in the journey, then it was their job to go back and do it again,” says Amy. For example, students were asked to redo assignments that received a score below 70.

And when asked about grades, Amy would tell people that school is not about the grades, but whether students learn. “I told the staff, ‘Let’s not worry about all the stuff that society worries about and just do what is right for kids.’ And that’s where everything went really well for us.”

Amy is the first to admit that standing for students first was a difficult position to take, but one on which she refused to compromise. “I think for some of the younger principals who aren’t as confident, the superintendent comes down hard on them if their test scores don’t improve,” she says. “If this had happened to me, I would have had to leave and find a school that focused on character education because that’s what I believe in.”

2. Balance humility with self-confidence. As it turns out, being able to listen to feedback, elicit the opinions of others, and express appreciation—key factors of humility—are not enough for leaders who aspire to lead others with humility. They also need to appear confident in their leadership. While this might sound contradictory, it’s really not: research suggests that humility and confidence need to go hand in hand.

For example, one study found that teachers believed the most effective school leaders were those who showed high levels of humility with at least a moderate level of self-confidence. Interestingly, leaders who showed low humility, but high confidence were considered to be the least effective. And those with high humility but low confidence were perceived to be doubtful, indecisive, and insecure.

Amy found this balance in her leadership. On the one hand, she says, “I was gutsy and I was sure I was doing the right thing.” But in the same breath, she explains, “Being okay with the fact that I didn’t have the answers helped the staff realize how important their voice was. They were empowered by my need for them, which empowered us as a whole. We took a lot of risks and made a lot of mistakes, but that was how we learned.”

The natural [servant leader] is more likely to persevere and refine a particular hypothesis on what serves another’s highest priority than is the person who is leader first and who later serves out of promptings of conscience or in conformity with normative expectations…Why would anybody accept the leadership of another except that the other sees more clearly where it is best to go?

In other words, the leader who puts the well-being of followers first—“people-building, not people-using”, to use the words of Greenleaf—grows in his or her understanding of what is best for all involved. And people will notice and follow that person.

“The best thing you can do is build the deep relationships,” says Amy, applying Greenleaf’s insight. “Don’t be afraid to go to your staff and say, ‘I don’t know. Why do you think I can make a better decision than fifty of us together?’ One of the best compliments I got from a teacher was, ‘You never give us answers, you only ask us questions.’. If you go in thinking like a servant, then you will fly. If you go in thinking you know everything, then you’re going to fail.”