In a 2014 national survey conducted by the American Psychological Association, 31 percent of adolescents aged 13 to 17 said that their stress increased in the previous year, and 42 percent said they were not doing enough to manage their stress. Adolescents who experience frequent stress are more prone to depression and perform worse in school. 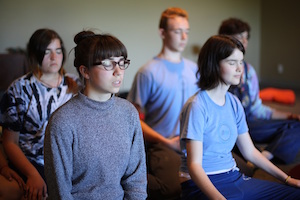 How can teens foster emotional well-being during this often-turbulent time of life?

Many teens turn to external sources—friends, family, hobbies. But what if they could turn inward and find support from within as well? In a recent study published in the Journal of Adolescence, researcher Brian Galla of the University of Pittsburgh found that mindfulness training can reduce stress and support health and well-being in teenagers.

In his study, conducted in summer 2013, 132 teens participated in a five-day mindfulness retreat by Inward Bound Mindfulness Education (where I am executive director). The retreat was designed to cultivate mindfulness, loving-kindness, and other positive mental and emotional capacities such as self-compassion and gratitude. Adolescents learned to concentrate better and be more accepting of their present-moment experiences, as well as adopt an attitude of care for all human beings, including themselves.

Each day of the retreat typically included formal sitting meditation, walking meditation, yoga, and workshops. Adolescents also attended small group sessions of six to eight individuals, with two or three adult facilitators. In the groups, they practiced interacting mindfully with their peers, while discussing their thoughts and feelings about the retreat experience.

Before and after the retreat, teens completed surveys assessing their stress, symptoms of depression, and negative emotions such as anger and anxiety. They also completed surveys measuring mindfulness, self-compassion, positive emotions, and their overall sense of satisfaction with their lives. Three months later, Galla’s team contacted the teens again and had them complete the same surveys to see how well they were doing.

The results were clear: Immediately after the retreat, teens felt less stressed and depressed, and were happier, more self-compassionate, and more satisfied with their lives. More importantly, the benefits of the retreat endured. Three months afterward, teens still reported feeling better than before the retreat began. In other words, teens learned skills during the retreat that seemed to help them manage stress and other challenges in their daily life.

Which skills were most supportive of long-term well-being? The results showed that self-compassion was key, even more so than mindfulness. Teens who cultivated a greater sense of inner kindness and sympathy toward the difficulties in their life were the least stressed, least depressed, and most satisfied with their lives after the retreat.

Another study by Galla published in the Journal of Applied Developmental Psychology in 2017 further supported these findings. When compared to a control group who didn’t participate, retreat participants again reported decreased depressive symptoms, increased gratitude and positivity, increased emotional self-regulation, and increases in working memory. This study provides additional evidence that weeklong, residential meditation retreats may support psychological health and well-being among adolescents to a degree that is comparable to months-long school-based programs.

How can other teens reap the benefits of self-compassion? During the retreat, participants learned to be more self-compassionate through a variety of activities that teens can easily bring home with them.

For instance, one of the practices the teens engaged in every afternoon was loving-kindness meditation. This meditation begins with cultivating an attitude of kindness towards oneself. Teens are encouraged to focus on their breath and repeat to themselves, “May I be happy, may I be safe, may I be at ease.” Then, the teens mentally extend that phrase to their loved ones, their acquaintances, and even people whom they feel negative emotions toward. The purpose of the practice is to create an atmosphere of acceptance and unconditional love starting from within.

In addition, teens learn the skills of sitting with emotions and understanding them as manifestations of needs. During meditation sessions, this might involve embracing one’s feelings with curiosity and kindness. Not only does this cultivate self-empathy, but it also encourages a critical understanding of stress; when teens are more aware of what they’re feeling, they can start to notice what triggers negative emotions and what soothes them.

Self-criticism, loneliness, and uncertainty about the future are some of the biggest challenges for adolescents. This study suggests that responding to personal failures and shortcomings with kindness, rather than criticism or rumination, is especially critical for adolescents’ emotional well-being. Stress can make teens feel isolated, unwilling to share their struggles with others; but self-compassion helps them recognize that everyone struggles, and they don’t have to feel alone.