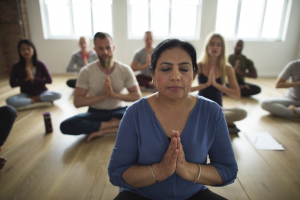 She recently worked with Center for Healthy Minds collaborator Helen Weng and Center faculty member Larissa Duncan on a project to expand diversity throughout a neuroscience study on meditation. In this Q&A, Ikeda shares how mindfulness meditation can be both inclusive and exclusive, both healing and traumatizing—all depending on people’s lived experiences and how they’re met with care during meditation practice or in their community.

Marianne Spoon: How might people’s identities and life experiences affect their meditation practice and their well-being? 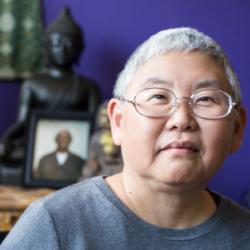 Mushim Ikeda: It’s important to note that there are hundreds of kinds of meditations, which are techniques and activities we are doing with bodies and minds. Here I’ll talk about mindfulness meditation, which is the same as insight meditation and vipassana meditation in the Buddhist tradition. The specific technique of mindfulness meditation is a thoroughly embodied practice. And by that, I mean that we understand that mind and body are not a binary. Often, this practice is learned by the directed activity of another human being (a teacher), and therefore in terms of diversity, the instructional language that is used is very important if someone is starting out.

As we know, because we live in society where there are structural and institutionalized forms of prejudice, some people’s access to education and access to medical care can be limited. Then there is more structural inequity that is also structural violence. This is especially true for people who are Black, Indigenous, and People of Color (BIPOC) or identify as LGBTQIA, or people with disabilities and illness, or people who are neurodivergent. Huge portions of our society fall into groups who are targeted in structural discrimination, where their basic human rights and basic needs as human beings are not met equally.

For meditation instructors to not understand that many people are likely experiencing repeated and complex trauma, their ways of leading meditation can be insensitive at best to deeply damaging at the worst. They might re-traumatize the very people they are trying to help.

MI: At the East Bay Meditation Center where I am, all of the teachers are moving into or are using and continuing to learn “trauma-informed” and “disability-justice informed” instructional language. They are based on the idea that the very words we use and the way the teacher delivers actual words—tone of voice, spacing, special attention to actual words—matter. The most simple way to get at this is to note the research we receive about trauma. People with trauma find it difficult or impossible to learn if they feel they are commanded with no choice or agency. That is why the instructions and variations of what is being told to them are important. If a meditation teacher says, “Now do this. Now do that,” this may not be suitable for all people.

The same is true for focusing on the breath, which is common in some widely practiced meditations. Some people have suffered traumas in which they’ve been threatened with violence by having air supply cut off (being choked), and, therefore, their awareness of breath is highly activating their trauma reaction.

A teacher needs to be aware of this possibility and probability because we live in a highly traumatized society. Instead of using a language of “command,” we use invitational language. We give people a lot of choices within the parameters of meditation techniques. We use invitations such as “If this is accessible to you,” “If this is available to you,” “If you like,” “You might try both and see what makes you feel safer.”

It is really recognizing that not all bodies are the same and that people are not the same psychologically, either. I want to especially acknowledge that this approach comes from groundbreaking work coming to us from the Niroga Institute, Access-Centered Movement, Trauma-Sensitive Mindfulness, and Dr. Helen Weng’s intersectional neuroscience research method.

MS: How has this awareness evolved for you as a teacher?

MI: When I originally trained in Zen Buddhism in the United States and Canada, it was standard to talk about spiritual “surrender,” so it has been a part of my vocabulary. However, at least 20 years ago, I was giving a talk to a People of Color meditation group at San Francisco Zen Center, and there was an immediate and very clear response from several Black-identified participants who experienced racism in daily life and whose ancestors were violently oppressed for generations. They said: “Surrender? Hell no!”

That’s when I realized the impact of my words was different than my intention. The responsibility was on me as a teacher to change and to use more skillful speech. I realized the importance of taking into account the trust and relationships between people of different statuses within the hierarchy of power and authority. An embodied meditation practice includes teachers being ethical and transparent, and students being empowered to understand that teachers serve community and that community does not serve or “submit to” the teacher.

When it comes to trauma-informed teaching, I don’t want to be unique—I want to be part of a larger movement, one where diversity is present in every group, including disability. There can be ways to be more resilient to trauma and build up resilience in communities targeted for oppression, and it’s a primary part of what we’re doing at the East Bay Meditation Center.

MS: What has been your experience working with scientists to broaden the benefits of meditation to more people?

MI: To be frank, being truly inclusive in research is good science. If there is a research study that does not have awareness of people who represent what we call the “many dimensions of diversity,” how can we claim that it helps most people?

Society tends to fracture across lines of difference, which can have profound implications for ethical, legal, and social institutional policies and structures that deeply, deeply affect human “be-ing” and human beings. In intersectional and inclusive neuroscience, there is no average brain or body. There is no such thing. These dimensions of diversity need to be included rather than excluded in order to get more accurate research findings that will be of help in understanding neuroscience itself.

For those interested in learning more, Ikeda recommends this podcast from Trauma-Sensitive Mindfulness author and therapist David Treleaven, on mindfulness and social justice.

This article was originally published on the Center for Healthy Minds. Read the original article.