Is it possible to praise your children too much? Last year I spent a lot of time emphasizing the importance of growth-mindset praise, and as a result this is a question I get asked a lot. The corollary is about whether it is possible to be too happy, or to spend too much time emphasizing positive emotions. If we keep asking kids what they feel grateful for, will they stop telling us when they feel angry or afraid?

Great questions. I am never meaning to imply that I think we should only emphasize positive emotions and praise, that we should never utter a negative sound to our children. (Can you imagine?) Funny thing, there is actually research on optimal ratios of negative-to-positive. 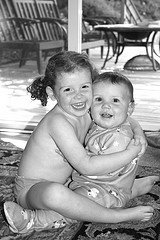 Flourishing individuals—high functioning people who score well on things like self-acceptance, purpose in life, environmental mastery, positive relationships with others, and personal growth—experience a ratio of about 3 positive emotions to every negative one. Having more positive than negative "feelings is more generative—it's associated with more creativity and openness to possibilities," says Barbara Fredrickson, who pioneered this research.

John Gottman has shown that unless a married couple can maintain a ratio of 5 positive comments or interactions to every negative one, their marriage is likely to end. (Those that get divorced typically have slightly fewer positive interactions than negative ones.) Similarly, high performance teams have a ratio of almost 6 positive "utterances" to 1 negative.

Researchers conclude that because negative emotions and experiences affect us more dramatically than positive ones do—feelings of being frightened, for example, will generally stay with us for much longer than having a good laugh—we need to have more positive experiences and feelings to thrive.

Research also shows that there is an upper limit to the amount of positive feelings a person can take, however. Specifically, a ratio above 11.6 positive experiences or feelings to 1 negative can, ironically, turn a person sour. This is not something that I'm going to worry about, though. I mean really: if I leap too high I might also hit my head on a cloud.

So yes, it is possible to emphasize the positive too much, to dole out too darn much praise. But at least in my household, the challenge is not too much positive, but in keeping the ratio of positive to negative "utterances" from me to the kids around 5 or 6.

Hi,  You mentioned ‘high performance teams have a ratio of almost 6 positive “utterances” to 1 negative.’….just wondering if you have a reference for this…I was talking to someone recently on a similar topic and would like to read more about this.

Barbara Fredrickson has a whole chapter on the science of ratios in her new book Positivity, which I highly recommend anyway.  References for the rest of the posting should be up later today, but 2 journal articles you could start with are:
Losada, M., and E. Heaphy (2004), “The role of positivity and connectivity in the performance of business teams: A nonlinear dynamics model,” American Behavioral Scientist 47: 740-65.
Losada, M. (1999), “The complex dynamics of high perforamnce business teams,” Mathematical and Computer Modelling 30: 179-92.
Warmly,

Christine,
This was a great addition to what you have communicated thus on far fostering an environment for happiness. I definitely think it is important to spend sometime talking with my kids daily about the not so pleasant emotions and experiences they may face. I feel it is important because it gives them an opportunity to be heard and to know that they are not alone with their problems. At times, it give us an opportunity to talk about important life lessons, like what makes a good friendship and what doesn’t. I think the trick really can be about ratio. Too much time spent on the bad and it becomes of the focus. Too much time on the good and they are left to deal with the tough stuff in life on their own.
Thanks for your work. It is extremely interesting to me and it, coupled with other sources I have read and incorporated into my parenting, have really helped my husband and I to create a very different home than either of us experienced as children.
-Clare
——-