"Happiness is not a matter of intensity but of balance and order and rhythm and harmony."
—Thomas Merton

Summer is a time of lovely things that look like bad habits once school rolls around again: sleeping late, staying at the park until dark, eating dinner in our bathing suits, falling asleep on the couch or in the car without preparing for the next day. I am all too aware of the fact that school starts again for my kids one week from today, and that our family needs to get back into our regular routine. I've written before about my belief that family happiness is all about being in good habits so that we don't have to beg and bribe our kids to do routine things, like brush their teeth. I want my family to be like a well-run school: kids are in the habit of washing their hands, helping out, putting their things away. The discipline of the school year has melted away this summer, and I can't wait to have it back. 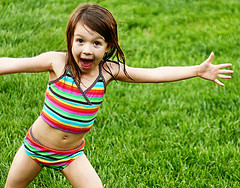 Starting tonight. At dinnertime, we are going to talk about what habits we want to start working on again. Change rarely happens all at once, especially with my kids. Instead, it happens in stages. People who successfully create new, healthy habits—or who kick a difficult habit like smoking—do it one step at a time. Psychologists James Prochaska and Carlo DiClemente have been observing and describing the various stages of change for decades, and what they've learned is that if you start trying to impose change when you or your kids are in the wrong stage, the new habit won't stick.

For example, I'd like my kids to start getting up at 7:00 am again, and to get dressed before they come to breakfast. Come to think of it, I need them to get all ready for school without me having to goad and beg and prod. If I just announce to them my new policy they'll revolt—they LOVE eating breakfast in their pjs.

The important thing is that at each step we all succeed. This means breaking our big goal into an action-plan made up of tiny micro steps that eventually get you there. So tonight at dinner, join me with the first few stages of change: think of what happiness habit you'd like to create to start the school year, and think about what the first teeny, tiny steps will be to get there. Friday, I'll put up another posting about the plan for changing your lazy-days-of summer habits back into a ready-for-success school routine.

I want to thank you for this posting as our son Kaleb is going to start his first day of kindegarten next Monday. Any advice we recieve about having a more organized household and getting the children to school on time and in good spirits is greatly appreciated.

Thanks Christine.  What do I do if my kids says, “I’m not looking forward to anything and school starts way too early!”  In other words, how do I motivate my teenager?  All I can come up with is, “if you are late to school they will give you detention.”  Threat based.  Ideas for older kids?
——-