Conscience. It’s that little voice in our head that tells us the right thing to do, tapping into the side of ourselves that is innately good and kind, helping to silence the side that isn’t. 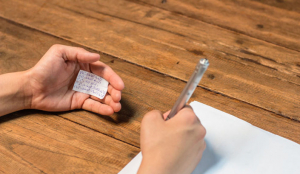 When we listen to it, we feel peaceful, knowing we’re doing the right thing no matter how hard it is. When we don’t listen to it, well, that’s another story. “There is no witness so terrible and no accuser so powerful as conscience which dwells within us,” wrote Sophocles 2,500 years ago.

Whatever the century, we always need more people who listen to and act upon their conscience. But developing a working conscience is no small feat. According to moral education expert Darcia Narvaez, the development of character is all about conscience. Parents and schools may teach children about virtues such as honesty, fairness, and responsibility through modeling, discussion, and practice, but when push comes to shove, it is a child’s conscience that determines whether they will put these virtues into action when needed.

To cultivate a strong conscience, research suggests that we start young, as the development of conscience begins in infancy and occurs mainly within the parent/caregiver-child relationship.

But educators, too, have an incredible opportunity to build upon the work begun at home. Indeed, schools in all their diversity provide the perfect environment for students to develop and practice the skills necessary for listening to and acting upon their conscience. So, where do we start?

First, how can we tell whether a young person is developing a conscience? According to researchers, there are several things to look for: Do they abide by the rules even when no one is looking? Do they feel concerned for someone who is hurt? And do they feel discomfort when they’ve done something wrong?

For example, if a child feels uncomfortable watching his friend speak disrespectfully to her mother—that is conscience. The child knows that it is not OK to talk that way to a parent, and he feels the emotions within himself that are telling him it’s not right. If he goes a step further and tells his friend that what she did wasn’t right, then he has made the choice to act upon his conscience.

Clearly, conscience is complicated. Scientists argue that a strong conscience is the result of complex psychological and relational processes, such as internalized values and norms, as well as the ability to feel empathy and guilt. And even if they have all these things in place, it doesn’t guarantee that kids will act on their conscience. That requires self-control.

While it may take a lot of effort to develop these skills in kids, ultimately, it’s really good for them—and for society. A study found that toddlers and preschoolers who were more likely to act according to their parents’ rules when the parent was not present were more engaged and had fewer social problems at school.

What can educators do to support the development of conscience in their students? Here are some research-based tips.

Children begin learning the difference between right and wrong from their parents or caregivers. For instance, if a baby hits the family cat, the parent’s “No!” teaches the child that this is not an OK thing to do.

However, researchers have found that the nature of the parent-child relationship is critical to this process. If the parent is warm and affectionate toward the child, building a secure and trusting relationship, then the child is more receptive to the parent’s efforts and is more likely to comply with their guidance.

Same goes for educators. Think of the teachers you’ve had in your life. Which ones were you more likely to take advice from? I’m guessing it was the teachers who made an effort to get to know you and who were warm and approachable. They were probably the ones who showed you respect, and who you respected.

So, take time to get to know your students—their likes and dislikes, their pains, their hopes, their dreams—and let them see that you value them as human beings. They’re also watching to see whether you handle conflict in fair and appropriate ways. Do you explain your expectations, or do you resort to threats or teasing?
Demonstrating care and respect for students will go a long way in encouraging them to listen to and trust your guidance.

2. Discuss, discuss, and discuss some more

As all educators know, students often interpret events very differently than their teachers. That’s OK. Children, from a very young age, are working hard to make sense of the world and its rules. And the process of figuring out the relationship between their behavior, an adult’s response to it, the impact it has on others, and moral emotions such as guilt is a very psychologically complex process.

The more they can hear your take on things, the more insight they gain into your thinking behind your moral judgment and how it differs from theirs. Research has found that mothers who took the time to explain the causes and consequences of a conflict in great detail had children with stronger consciences.

But as children get older, especially as they enter middle school, these discussions need to include their peers. Developmentally, they are starting to question and test the rules that they know to be “arbitrarily” set by the adults versus the rules that are moral in nature: “Why do we need to walk in a straight line at school?” versus “why can’t we cheat?”; “Why can’t we chew gum?” versus “why are we not allowed to make fun of someone on social media?”

Adults know that this world does not operate by absolute standards that can be universally applied. Kids need to learn this, too, and they need opportunities to practice and develop the wisdom that can help them navigate the thorniness of ethical dilemmas. This will also help them to internalize appropriate rules and identify the values that drive their conscience.

We have many identities: racial, ethnic, religious, political, social, economic, gender, sexual, and more. But the one identity that researchers point to as crucial for doing the right thing is our moral identity, or how important being a good person is to our sense of self.

Indeed, as a child more and more successfully embraces rules and avoids misbehavior, and develops empathy and compassion toward others, he starts to consider himself a moral person. This may in turn predict good behavior. One study found that five year olds who described themselves as very moral exhibited strong prosocial skills almost two years later. Other research has found that students with strong moral identities are more motivated to behave prosocially—sharing, helping, and comforting others—even when they don’t get any recognition for it. That’s conscience in action.

Educators need to help their students see themselves as good people. It’s OK to praise kids’ character! According to research, telling children (especially those who are around eight years of age) that they are a “helpful person” is more effective at encouraging future kindness than saying, “That was such a helpful thing to do.”

Other ways to cultivate moral identity include giving students simple cues, like having them read lists of moral principles or write stories using moral terms. One study found that this can remind them of their moral identity and help them to behave prosocially. Involving students in community service, and giving them opportunities to reflect on their experiences, can also help develop their values and identities as moral people.

This is the all-important “inner work” of conscience development—and there are many layers to it, starting with emotional skills.

Conscience usually makes itself known through our emotions, namely guilt and other socially oriented emotions that help us realize that we have done wrong or that others are suffering. Learning to identify these feelings—and understanding what they mean—can help students develop empathy for others, a critical element of conscience. Indeed, studies show that children who rate highly in empathy are more likely to show prosocial behavior.

We need to go a step further, however, and teach children how to listen to their inner barometers—the emotions that tell them they’ve done good or not so good. For example, think of the emotional “lift” you get when either you or someone you see does something kind. Researchers call this “moral elevation”—a built-in mechanism that acts like a personal cheerleader who tells us, “Yay! Keep doing more of this!”

Mindfulness can help kids grow their somatic awareness so that they can better tune into what their bodies are telling them and, hence, listen more closely to their conscience. By becoming more sensitive to the physical, mental, and emotional sensations in their bodies through the practice of mindfulness, they eventually may be able to recognize that inner harmony means a clear conscience—and uneasiness means something is off.

Finally, we need to help students develop self-control. Without it, they may not be able to act upon what their conscience is telling them. To give a fairly universal example, think of a time when your conscience told you to not buy a product that you really wanted because it came from a company that contradicts your values. Did you give in? If you didn’t, thank your self-control muscles.

The Brain Games from Harvard’s SEL Kernels help to develop students’ self-control by teaching them to stop and think before deciding what to do. It also encourages students to take deep, slow breaths to help them focus when emotions become overwhelming, as is often the case when found “guilty as charged” or when seeing another person’s suffering.

Learning to listen to one’s conscience is not an easy path—it can and it will hurt. That’s why Shakespeare called conscience “a thousand swords.” But facing those swords is part of the human journey. If enough of us learn to listen closely to our sense of right and wrong, then maybe, just maybe, we will reach the point when, as Eleanor Roosevelt once said, “our consciences grow so tender that we will act to prevent human misery rather than avenge it.”