I’ve been blogging about Chip and Dan Heath’s book Switch, which is a scenic tour through research related to organizational change.  Their essential observation, based on mounds of data and empirical research, is that when people (or organizations, families, or even countries) successfully make major changes, it is because of three things:

1) Someone has directed the analytical thinking portions of people’s brains.
2) Someone has influenced how people feel about a situation or behavior.
3) Someone has changed the situation in which people are acting. 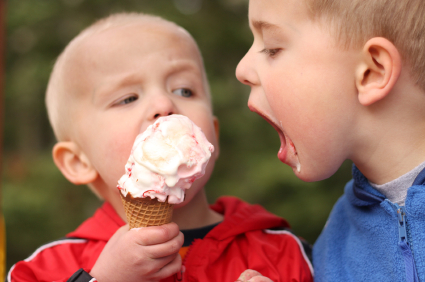 This final method of imposing change upon your family is my favorite.  It also can be categorized as “science of the blazingly obvious” because it seems so simple.

This third way of enacting change is often the most overlooked “switch” of all.  The other day I was visiting some friends, and the kids, Megan (10 years old) and Tucker (8), were eating a snack at the counter, side-by-side— proximity that should be called “poking-distance” for all grade school kids.

Megan and Tucker were subtly jabbing each other with their elbows.  “Tucker, STOP IT!” the older sister shrieked.  “Idiot!” Tucker muttered under his breath.  “SHUT UP!!” Megan screamed back, furious, millimeters from Tucker’s face.  My friend looked at me with utter dismay, and exhaustion.  “Please fix this,” he said with a sigh, pointing at his children.

Now, Megan and Tucker’s parents are not push-overs when it comes to sibling fighting.  They issue time-outs, take away privileges, and have perfected their best lectures on sibling kindness.  But here is a clear case where change is needed, and where a change in the situation is the simplest solution.

“Megan, you eat your snack here, from now on,” I said, moving a pile of mail and a laptop and directing her to the end of the counter, out of poking distance.  Tucker stayed at the other end.

As it turned out, this was all it took.  No more bickering at breakfast, lunch, and dinner.  For these two, being placed out of physical proximity made all the difference.  (This same trick works for me in the car, too: If I put one kid in the 3rd row and one in the 2nd, they tend to spend more time singing along with the radio and less time provoking each other for entertainment.)

Research has found that often all we need is a subtle shift in our environment to prompt a corresponding change in behavior.  My favorite studies are the ones where researchers give people utterly stale, chewy, and disgusting popcorn and measure how much of it they eat during a movie. Time and again, the people given a larger container of barely-edible popcorn eat far more than people given a smaller amount.

“When it comes to changing behavior,” the Heath brothers write, for some people, “environmental tweaks beat self-control every time.”

What looks like a “character problem”—kids who can’t treat each other nicely, perhaps—is often an “environmental” problem, correctible by changing the environment.  And so our character judgments turn out to be in error: if they can get along in some situations, it must be the environment, and not the kids.

Another way that we can use our environment to initiate change is to use “action triggers.”  An action trigger is just a simple decision to behave in a specific way at a particular time and place.  Studies find that “the typical person who set an action trigger did better than 74 percent of people on the same task who didn’t set one,” write the Heaths.

So when I wanted my kids to start hanging up their backpacks on their handy new hooks (and not leave them in the middle of the entryway, right at the bottom of the stairs, for everyone to constantly step over), they chose a simple action trigger.  They decided that when they walked in the house, before they removed their shoes or did anything else, they would hang up their backpacks.

Sounds too simple, I know, but putting the emphasis on their intention, and on the action of “walking into the house,” rather than just telling them the action I wanted them to take, seemed to have enacted some sort of miracle.  (I did, at first, always point out the action trigger to them, as in, “You are NOW WALKING INTO THE HOUSE.”  They knew what to do.)

I can’t wait to hear how this last trick works for you in your households.  What small environmental tweaks help you make changes in your family?  Please share your ideas and experiences here so that other families can learn from you!