Adolescence can be a stressful period for the parent-child relationship. Could mindfulness help? A new pilot study took an innovative approach to the problem, combining classes for both preteens and parents with brain scans of the parents and reports from their children on how mom or dad were doing. 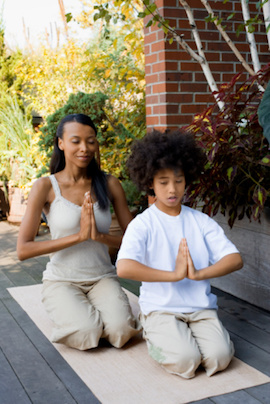 Previous studies found that mindfulness practice can lessen stress, depression, and anxiety in parents of preschoolers and children with disabilities—and that mindful parenting is linked to more positive behavior in kids. This new study is the first to use neural imaging to see how mindfulness practice changes the brains of parents—and the results suggest that cultivating moment-to-moment awareness may help them to become calmer and more empathic with their children.

The study, led by Elliot T. Berkman of the University of Oregon, included 18 parent-and-child pairs; children ranged from age nine to 13. Each pair attended an eight-week Mindful Families Stress Reduction Course, which was an age-appropriate adaptation of the gold standard Mindfulness-Based Stress Reduction course designed by mindfulness expert Jon Kabat-Zinn, professor emeritus at the University of Massachusetts Medical School.

Importantly, these sessions did not involve any explicit parenting instruction. “It was purely just coming together and doing a variety of mindfulness exercises,” says Lisa May, first author of the study. “There’s a famous one where everybody gets a raisin and everybody looks at the raisin and contemplates it.”

The parents and children were also sent home with some guided meditation exercises that they could practice at home, such as an exercise that required focusing on brushing their teeth mindfully. Not all the families were very diligent about practicing outside the weekly course meetings, but that’s not necessarily a bad thing. “I think that that partly speaks to being a busy family and even makes the results more promising,” says May.

Overall, parents reported decreased stress and increased mindfulness after completing the course. And there was a relationship between the two—parents who increased the most on measures of mindfulness showed the largest decreases in stress. While the adolescents, overall, did not report a significant change in how positively they viewed their family relationship, there was a significant increase overall in children’s perceptions that their parents were paying attention to them (so-called parental monitoring).

When May and colleagues compared the brain activity patterns in the parents during the breathing task and the mind wandering task, they saw that the mindfulness activity led to more activation in brain regions known to be involved in attention—consistent with previous results looking at the effect of mindfulness on the brain.

“But what was surprising is when we looked at what changed in that comparison from before the intervention to after the intervention, we saw something completely different: we saw areas related to emotion processing,” says May. The regions that showed increased activity after completing the course included ones known to be involved in self-awareness (the precuneous and the ventromedial prefrontal cortex), emotional regulation (the lateral prefrontal cortex), and emotional awareness (mid-insula).

But perhaps the most intriguing finding in this study was that parents who had the most activation in a part of the brain involved in empathy and emotional regulation (the left anterior insula/inferior frontal gyrus) had children who perceived the greatest improvement in their parent-child relationship.

These results, while quite preliminary, suggest that simply completing this brief course with their kids changed the parents’ brains and possibly made them more empathetic and able to recognize and regulate their own emotions.

May stresses that it is important to take care when interpreting this small pilot study, particularly since it lacked a control group. It could be the benefits of this study came from something as simple as parents and adolescents spending quality time together each week.

“Parents often reported feeling a lot of benefit, and their children reported benefit, just from going to something alone with their parent once a week,” says May. “That in and of itself is wonderful. If we were to do a really tightly controlled design we might see that fewer of these effects were related to the mindfulness practice and more was it was just relationship building for parents and kids.”

May recommends that parents who are interested in mindfulness check out the book Everyday Blessings: The Inner Work of Mindful Parenting by Myla and Jon Kabat-Zinn or look into Kabat-Zinn’s guided audio meditations. While the jury is still out on whether mindfulness practice—by parents or parents and children together—has specific benefits for the parent-adolescent relationship, at the very least it is likely to lessen parental stress—which is no small thing!