“Let us use this occasion to expand our moral imaginations, to listen to each other more carefully, to sharpen our instincts for empathy, and remind ourselves of all the ways our hopes and dreams are bound together.”—President Obama’s Eulogy in Tucson

Chances are, your kids spent at least some time over the last week talking about the Civil Rights movement in honor of Dr. Martin Luther King, Jr. Day. I’ve been quizzing the various kids in my life about what they know and what they’ve learned about Dr. King;  what they say is usually a little surprising to me. 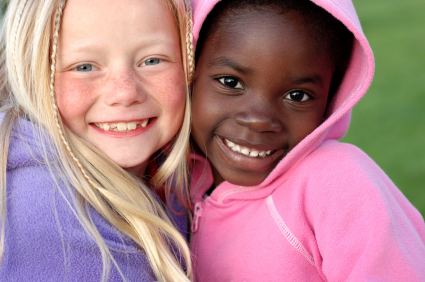 A few kids in the back of my minivan seem fixated on the violence surrounding Dr. King’s death. Others tell stories of segregated playgrounds, water fountains, and buses. None have discussed racism as being a problem today.

Me: Do you think that people can be prejudiced?

Molly: Like The Princess and the Frog. That movie is racist.

Me: Molly, what does it mean to be racist?

Friend 2 (white girl, age 7): That’s not true. I love that movie and I’m not racist. It takes place in the olden days.

Fiona (age 9): It wasn’t really that long ago, my teacher says.

Friend 3 (white boy, age 9):  Did you know that people used to swear at Martin Luther King? We saw a movie in school and we heard a lady swearing at him when he was a kid.

Friend 3: He got shot. Like those people in Tucson.

More silence. I’m trying to think of what to say.

Fiona: I think Ainsley [her friend who is black] would make a great president.

Molly: Yes, she made a good speech at All Together Now [a school assembly].

I find myself holding my breath during most of these conversations. But as uncomfortable as it can make me, here is my Walking the Talk challenge this week: Keep talking to the kids about race.

Research shows that although more than half of parents don’t deliberately talk to their kids about race at all, the parents who do talk about race in their family tend to have kids who are better able to identify racism when they see it, and who are more likely to hold positive views about ethnic minorities.

I know that my kids notice the differences in skin colors and lifestyles in the diverse community in which we live; this is normal. Research suggests our attunement to racial difference is biologically based.

To raise children who aren’t prejudiced, the vital first step is simply to talk to children about race. In her Greater Good essay on the topic, which also appears in the Greater Good book Are We Born Racist?, psychologist Allison Briscoe-Smith shares compelling evidence that these conversations, if awkward, are powerful:

A study done by Frances Aboud and Anna Beth Doyle took nine- to eleven-year-old children who held prejudiced attitudes toward ethnic minorities and placed them with other nine-to eleven-year-olds who held less biased beliefs. They asked the kids to talk for two minutes about some of the race-based beliefs they had endorsed earlier in the study. The results were remarkable: after these conversations, the high-prejudice kids demonstrated lower prejudice and more tolerant attitudes. Given this impact of a two-minute conversation with a peer, imagine what a childhood of conversations with parents could achieve.

Knowing how to have these important conversations and knowing what to say isn’t easy. I’m not surprised that one of my conversations with kids about race turned up a comment about the Tucson shootings; racial hatred and political violence are close cousins.

For that reason, here’s a place to start: President Obama’s eulogy for the victims of the Tucson shootings. I find his speech to be a source of inspiration and a springboard for conversations with the kids about race, particularly passages like this:

We may ask ourselves if we’ve shown enough kindness and generosity and compassion to the people in our lives. … We recognize our own mortality, and are reminded that in the fleeting time we have on this earth, what matters is not wealth, or status, or power, or fame - but rather, how well we have loved, and what small part we have played in bettering the lives of others….

I believe we can be better. Those who died here, those who saved lives here - they help me believe. We may not be able to stop all evil in the world, but I know that how we treat one another is entirely up to us. I believe that for all our imperfections, we are full of decency and goodness, and that the forces that divide us are not as strong as those that unite us.

For more ideas about how to raise unprejudiced children, read the rest of Briscoe-Smith’s essay, pick up the Greater Good book Are We Born Racist?, and check out Rudy Mendoza-Denton’s tips for reducing predjudice.

Do you talk to your kids about race? If so, how old are your kids, and what sorts of things do you talk about?