But are these criticisms justified? A recent study in the journal Pediatrics set out to determine whether all video game playing is bad for kids’ health, and which factors determine whether certain kids might be more at risk. 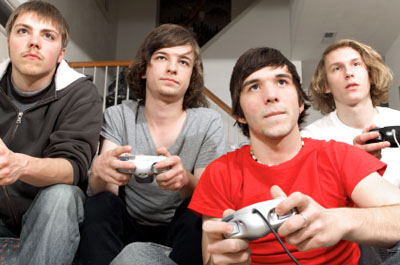 Researchers surveyed more than four thousand public high school students in Connecticut. The students provided anonymous information about their gaming habits, indicators of their health (such as their body mass index), and risky health behaviors (such as their use of drugs and alcohol).

The results suggest that physical and mental health problems linked to video games depend on a student’s psychological investment in those games. Those who were more deeply invested in the games, deemed “problematic” gamers, were more at risk than “recreational” gamers.

The researchers classified a student as a problematic video gamer if he or she agreed with all of the following statements:

The survey results show that problematic gamers are much more likely to smoke cigarettes, be aggressive, and show symptoms of being depressed. Interestingly, problematic gaming was not linked to a student’s grades, extracurricular activities, or the use of drugs and alcohol.

Among recreational gamers, the prevalence of these types of problem behaviors differed across genders. Compared to non-gamers, recreational gaming girls were more likely to get into a serious fight or carry a weapon. At the same time, this group had a lower risk of depression.

Compared to non-gamers, recreational gaming boys were no more likely to use alcohol or drugs, be overweight, or show symptoms of depression than non-gaming boys. They were also less likely to report being a regular smoker.

This research challenges the popular belief that video game playing leads to exclusively negative outcomes for youth. The researchers suggest that future studies should focus on determining safe levels of gaming, identify risk factors for problematic gaming, and develop ways to intervene before the problem takes root.

What’s more, given video games’ tremendous popularity among kids, the researchers suggest that more research should explore how these games could promote positive mental and physical health.

This is an interesting and thought provoking item Neha – thank you.

I’m surprised that such a powerful article on such an important subject hasn’t produced strong reaction and comment – even to the point of controversy.

Perhaps this is another example of a simple question clouding an issue by being asked of a complex system? Are video games good – yes! And are video games bad – yes again! It all depends on quantity, circumstances and the individual – like fats and transition metals in our diet and UV on our skin.

Meanwhile the anecdotal and personal evidence that feeds our feelings and opinions - for both viewpoints - grows by the mountain-load.

And anyway, aren’t all good things toxic in excess?

Good point Paul.
I’m always sceptical on these kind of studies because it indeed mostly has to with the individual and upbringing itself. It’s very short-sighted to only point a finger to the gaming industry.

One thing I must say with my own observing over the years especially dealing with younger kids.  I noticed people that tend to play lots of video games especially in their younger years tend to be more likely to develop ADHD.  Now this is just one variable in the equation, however if you look at most video games today there is a lot going on in them.  Maybe that is why the attention to regular non exciting video games becomes the problem?

This is a really interesting study. I think for some kids there is a time when they recognize that there are more interesting things to do in life than playing video games.

So what are these teenagers or grown ups thinking about their past? When I think about my past where I was playing video (where I was aged 11 to 14 I think) it was a waste of time.. and I’m happy I’ve never got addicted again by those games.

i didn’t know about that !!
the kids will love this post if they read it

I think that video games have both good and bad aspects. Good ones would include increased mental stimulation, hand eye coordination improvement, potential for increased problem solving and cognitive functions, and also a better understanding and liking of new technologies. Some bad traits would obviously be potential for lack of exercise, isolation, and potential dependence on them for social interaction. Like all things, In moderation video games are perfectly fine.

I think you are half right and half wrong. My brother plays
LOTS of games online and violent video games, but he is
really active and really skinny. Me… I play almost as much
and am not very active, but I get very good grades and get
good results in test and in school performance. I do like
your website though. It will be a big help for my debate
coming this June. Hanks for the info! 😊